Erik Burnett-Godfree provided just the sort of enthusiasm we were looking for in at 8pm on a Friday night, the numbers had by the time of the talk swelled from 40 for the AGM, to more like 70 for Erik's talk. He began by setting the date, the 22nd of November in history, it's St. Celia's day, and also the anniversary of the death of JFK, Aldous Huxley and CS Lewis, and several other things.
Erik then rapidly rattled through his CV before moving on to our 'fantastic collection of 20th Century British art. 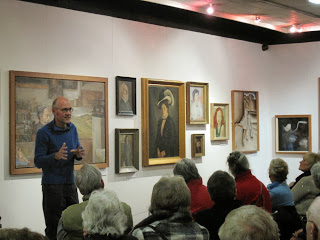 He outlined the role played by three key people in acquiring the collection: Harold Jolliffe, Borough Librarian from 1946-68 who thought in 1963, it was time we had an art gallery in Swindon. James Bomford, after loaning the greater part of his collection to Harold Jolliffe, announced he was giving it to Swindon. The third person mentioned was Richard Morphet, long associated with the Tate Gallery, firstly as a curator, later as Keeper of the Modern Collection, he advised on acquisitions for 30-40 years. He was given a small purchase fund, and went shopping for modern work produced by artists creating reputations.
One of the conundrums now is how we can afford to fill in the gaps in the collection, one way would be to encourage works to be gifted by collectors who would like their works to sit among our collection.
Erik went on to look at particular paintings in detail and talk about his admiration and fascination with them; including  Ben Nicholson's 'Compostion in Black and White' 1933 and
LS Lowry's long line of people entitled 'A Procession'. 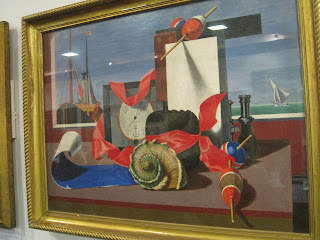 Edward Wadsworth's 'Bright Intervals' seen above is a particular favourite of Erik's, it's a super realistic painting with many contradictions. 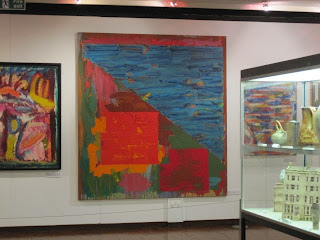 John Hoyland's application of paint in 'Trickster' is in complete contrast to Wadsworth's smooth application.
The final painting he talked about was Maggie Hambling's 'Descent of the Bull's Head'. 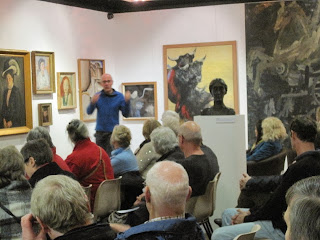 After the entertaining and informative talk, we anticipated thanks from Paul Ricketts, but there was added excitement in the shape of Mike Pringle who had nominated Erik Burnett-Godfree for a  Swindon Does Arts Hero Award. 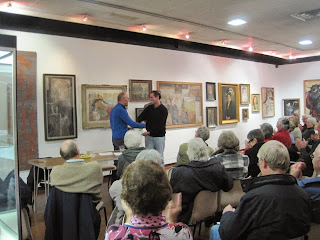 Here he is rather far away receiving the award.

And afterwards holding it in his right hand and moving too quickly, so he and Mike are blurry. 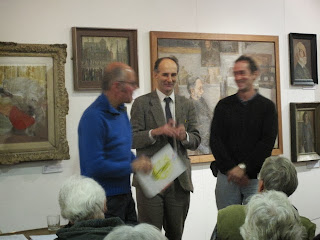 Lastly, I have included 3 photos which give an impression of the numbers of people who attended the talk last Friday. It was a great evening, our thanks again to Erik for coming along and inspiring so many. 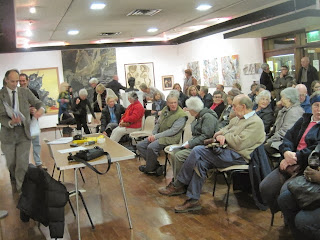 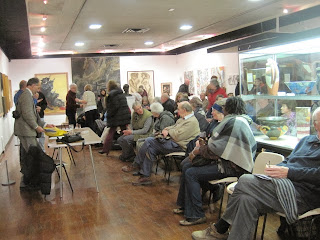 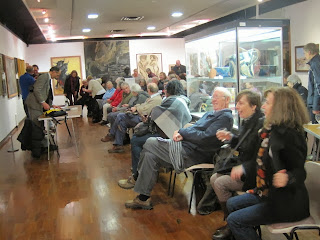 Posted by Friendsof Swindon Museum and Art Gallery at 13:43 No comments:

AGM on Friday 22nd of November

The 20th AGM of the Friends of SM&AG was held last Friday at 7pm. There were about 40 people present, it felt almost crowded, I have tried to take a photo to give an idea of the numbers, but because of the way the seating was arranged, it wasn't easy. 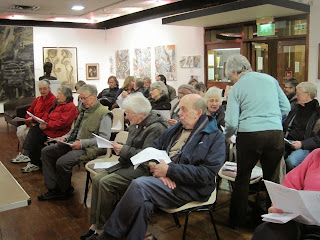 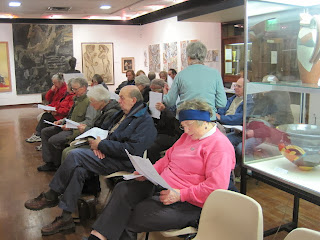 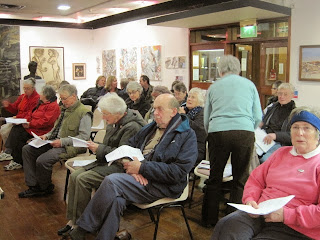 After the main business of the meeting, Helen Miah, recently appointed team leader of the M&AG, talked about 'the way forward'. This involves looking at the possibility of building a new museum and art gallery in the town centre on one of a possible 4 sites to be decided on the 11.12.13 at a council meeting. In the meantime, there will be new exhibitions, starting with an abstract exhibition next January.
Paul Ricketts, chair of the Friends wrote eloquently in his report for the AGM about the optimism he felt about the recent changes in personnel managing the museum and art gallery, particularly its move from the museum sector. To quote Paul:
'After years of running the staff numbers down and losing visitors as a result, Swindon Borough Council finally appear to have got serious about the Museum and realised that this is how a town can best show how proud it is both in where it has come from, where it is now, and where it is going.'
Those who couldn't attend the AGM will receive a copy of this report.
We hope to increase the number of Friends, and improve communication with them via email. If you have not yet sent your email address, please do so by emailing lindakasmaty@hotmail.com
Posted by Friendsof Swindon Museum and Art Gallery at 14:45 No comments:

The talk is at 8pm and follows the Friends' AGM which starts at 7pm, both are being held in the gallery. Tickets for the talk cost £3.50 for members and £4.50 for non members, they are available from the reception at the Museum and on the night. 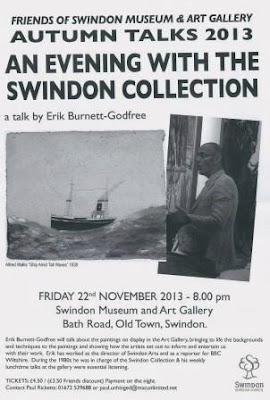 Posted by Friendsof Swindon Museum and Art Gallery at 10:54 No comments:

It seems that the Highworth Pot has been talked about for a long time, it was found in 2008, and has undergone several procedures at the Wiltshire History Centre, including analysis of its contents.
The pot is estimated to be Roman, from around 1-2AD, it was a useful pot then because when it broke, it was mended. Here's the information that goes with the Pot: 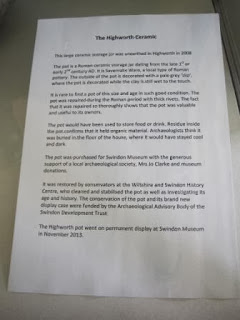 The last time I saw the Highworth Pot was on a visit to the Wiltshire History Centre, I wrote about it on the 22nd of February 2012, so it was good to see it without the 'bandages' which it appeared to have round it then: 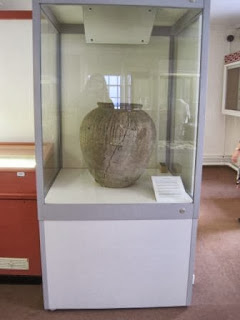 Above in its case, and below a couple of photos to show you the staples: 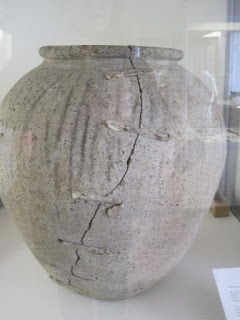 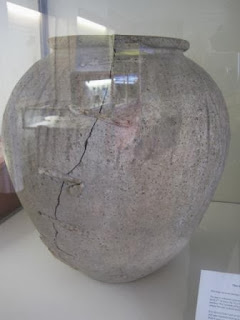 The 'offical' photograph used in publicity is this one which is great because it's without reflections: 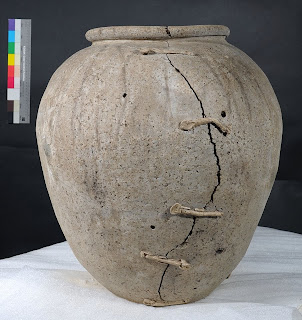 Come along and see the Highworth Pot soon.

Posted by Friendsof Swindon Museum and Art Gallery at 09:53 No comments:

The Friends of Bristol Museums, Galleries and Archives visited the Swindon Museum and Art gallery on Friday afternoon, after lunch a Heelis, the National Trust headqueaters. There were 44 of them, so they were divided into two groups, while Sophie Cummings, the curator of SM&AG showed half of them round the gallery, the others looked round the museum.
It was interesting to hear the gasps as people came into the art gallery and saw the paintings on display.
After Sophie's talk, it was interesting to find out more about the Bristol Friends; the membership is about 800, they seem to be a very active organisation, something to aim for in the future.
Here are a few photos of the Bristol Friends taken in the gallery: 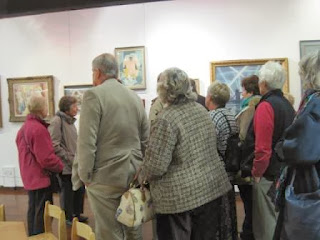 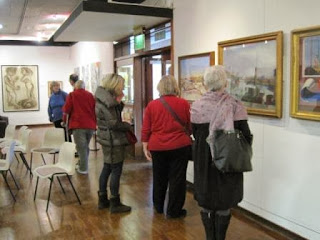 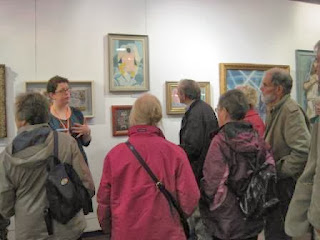 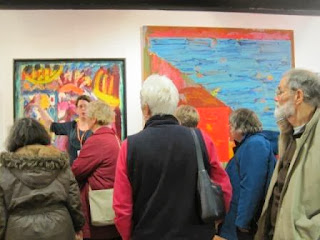 Sophie in front of 'Florestan' 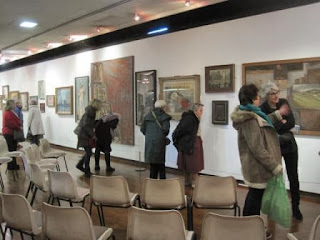 Above people looking round, there were complaints that the labelling was hard to read where it was low down, two people can be seen trying to read a label. 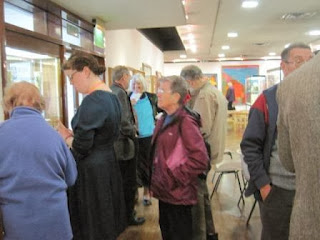 To find out more about the Bristol Friends, please click on their website below:
http://www.friendsofbmga.org.uk/about/
Posted by Friendsof Swindon Museum and Art Gallery at 09:39 No comments: 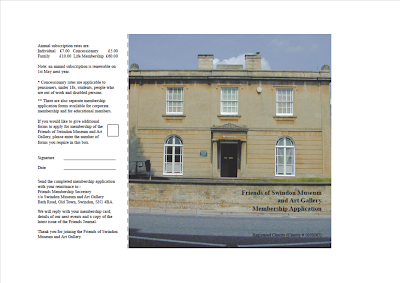 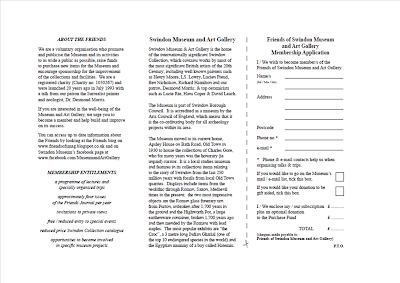 Posted by Friendsof Swindon Museum and Art Gallery at 09:11 No comments: