This looks interesting, it isn't a Friends talk, but wanted to help publicise it. 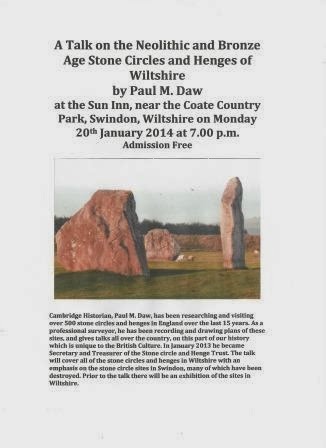 A talk on the Neolithic and Bronze Age Stone Circles and Henges of Wiltshire will be given by Paul M Daw at the Sun Inn, near Coate Country Park, Swindon
Admission: free
Cambridge historian Paul Daw has been researching and visiting over 500 stone circles and henges in England over the past 15 years. As a professional surveyor, he has been recording and drawing plans of these sites, and gives talks all over the country on this part of our history which is unique to British culture. In January 2013 he became the Secretary & Treasurer of the Stone Circles and Henge Trust. The talk will cover all the stone circles and henges in Wiltshire with an emphasis on stone circle sites in Swindon, many of which have been destroyed. Prior to the talk there will be an exhibition of the sites in Wilts.
Posted by Friendsof Swindon Museum and Art Gallery at 04:08