Andy Binks will be giving a talk on Swindon's past this Friday at 7.30pm tickets available from the Museum or on the door, or by ringing 01793 466556.
Andy will bring along a selection of photographs of Swindon's past from out of the archives of the Swindon Society. An opportunity to see Swindon as it was and delve into the stories and history of Swindon's adolescence.

To find out more about the talks and trips this summer, please click on the 'Talks and Trips' at the  right hand side of the blog.
Posted by Friendsof Swindon Museum and Art Gallery at 14:06 No comments:

The Lost Chalk Figures of Wanborough

Bryn Walters gave this excellent talk to the Friends on the 28th of March to what seemed like a fairly packed house of about 50 people. Before the talk I knew very little about hill figures and hadn't thought much about them, although when a student at UCNW in Bangor in the 1970s, a Rag Week stunt was to carve a panda into a chalk hillside somewhere which impressed me at the time.
Bryn, an archaeologist has taken a passionate interest in hill figures, particularly the ones in Wanborough for 40 years.
The original aerial views of the hill figures in 1966 taken by Gerald Wooland from the Swindon School of Art before the M4 was constructed, are very faint, but can be seen more clearly using computer enhancement.
It is thought the two figures were to frighten off the invading Saxons in 570AD, one had oculi and the second figure is thought to be Woden, god of war and giving his name to Wodensborough eventually Wanborough. The figures are approximately 50-60metres tall on a hillside seen from Liddington long barrow across the vale, and like all hill figures are best seen from a distance.
Many questions are unanswered, are the figures contemporary? Do they interrelate?
It is thought Gerald Wooland may have given the negatives of the aerial views to Denys Hodson, who may have given them to the Swindon Museum, we were issued a challenge to find them in the store rooms.
I took 3 photos of the evening, the first one shows Bryn Walters and Paul Ricketts at the beginning of the talk: 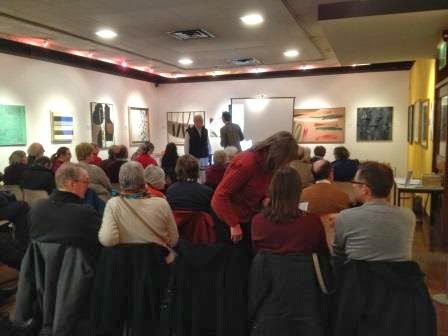 The other two from different angles in the gallery: 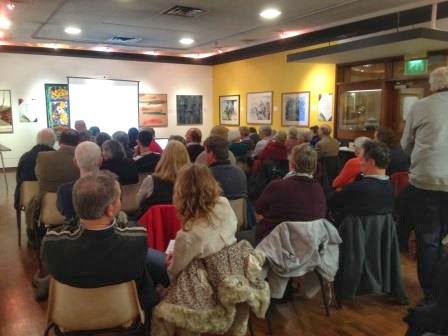 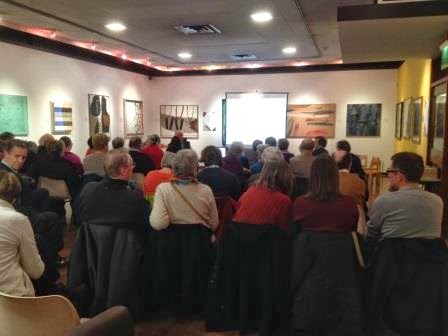 Next talk 'Gone But Not Forgotten' by Andy Binks on Friday 24th April at 7.30pm
To buy a ticket in advance phone museum on 01793 46656 or buy on the door on the night.
Posted by Friendsof Swindon Museum and Art Gallery at 13:36 No comments: