This Friends trip which took place on Tuesday July 15th, was suggested by Mike Yates who was keen to see the ceramics. Ken's collection is housed at 48, Park Row, behind the Bristol Guild on Park Street, easily reached by train and then a number 8 or 9 bus from Bristol Temple Meads station.
Comparisons between Kettle's Yard in Cambridge and  Ken Stradling's collection have been made, and there certainly is a charm to both collections because of their being sited in household situations. Although Ken's 'house' is much smaller than Kettle's Yard, being able to handle the objects, mostly linked to food preparation, eating and drinking, and meeting Ken and talking about his collection  was very special.
It is possible to visit without appointment on Wednesdays, or gather together a group of  10 or 12 together and visit by arrangement, more information on the website: http://stradlingcollection.org/
Listening to Ken Stradling  talking about buying objects he liked from when he worked at the Bristol Guild made buying objects one likes seem quite acceptable rather than an extravagance. When he talked about the things he's bought, he obviously still really enjoys looking at them.
After an initial opening talk, we started looking in the cellar where certain things are stored so they can be rotated: 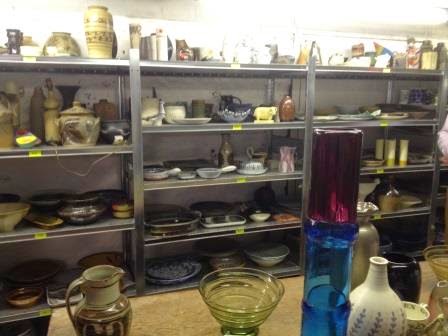 Below the curator of the collection 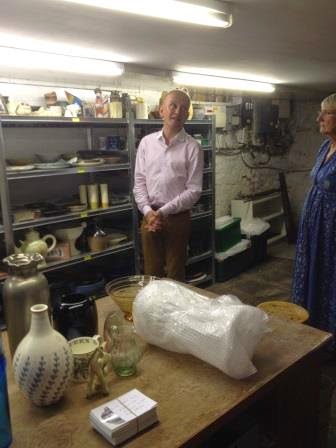 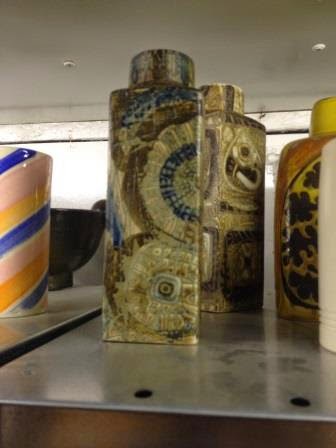 Above and below close ups of ceramics which I liked 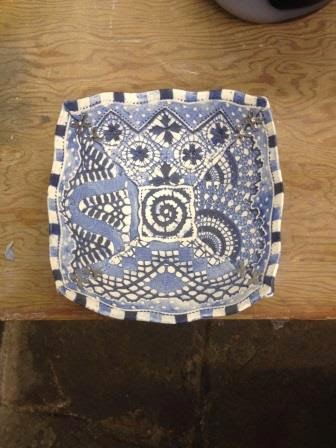 After the cellar, we looked round the first floor where Peter Wright's interlocking sculpture was displayed 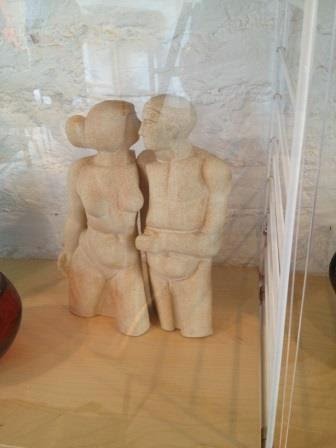 Below a Thomas ‘Sam’ Haile Bowl 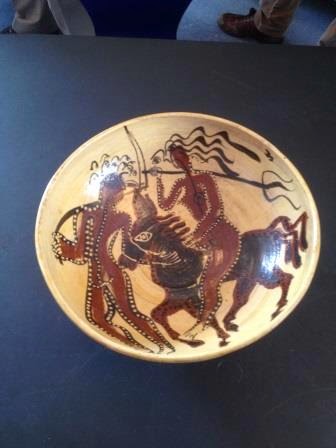 And here's Ken talking about a particular bowl someone had asked him about. 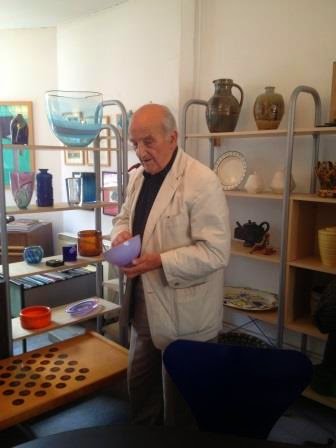 Below a close up of the table beside Ken 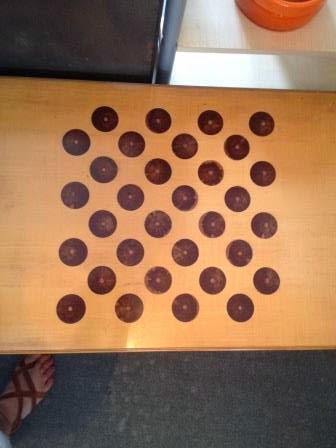 There are news items about ken and the collection dotted around 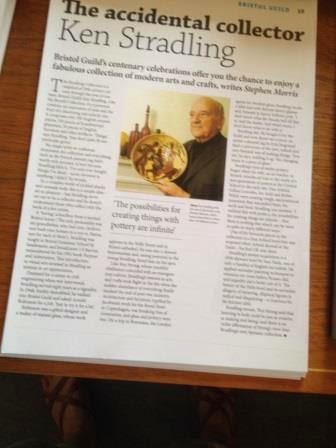 I photographed this vase because it's an example of one made at Clevedon Court pottery. 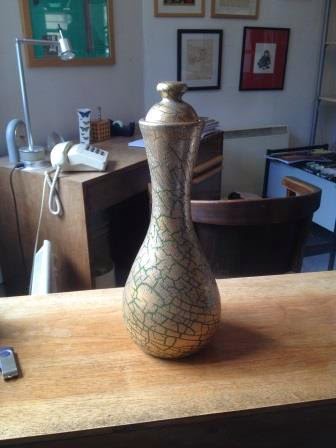 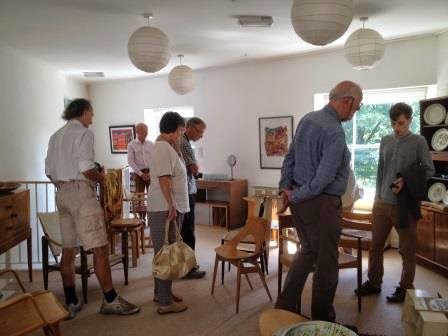 Below a Poole pottery Coronation mug 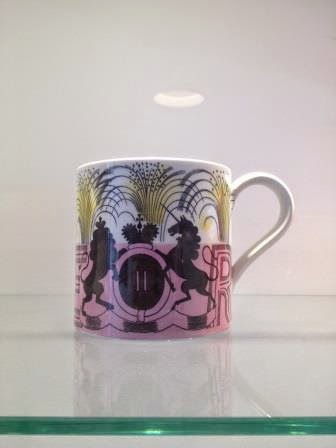 And one of my favourite pieces, an oval 'Rooster' dish made by Nicholas Vergette in 1953. 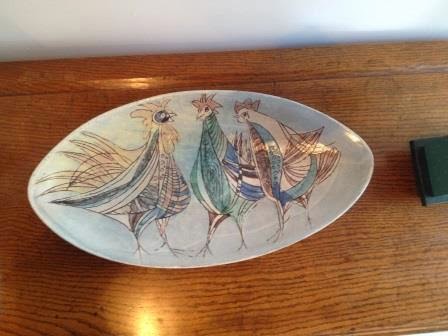 I found it hard to decide which book to buy, and ended up with a catalogue produced for an exhibition of some works in the collection at Monnow Valley Arts in Hereford
Posted by Friendsof Swindon Museum and Art Gallery at 14:47 No comments:


Artist collective Second Mouth and Swindon Museum & Art Gallery are working together to bring you Creative Copies, a series of fun and original art workshops taking place in the gallery this summer.
They say:
'Through the workshops we hope to raise £450 to restore ‘Study for Cephalus and Aurora’ by British artist Leon Kossoff for the Swindon Collection of modern art.
This small and richly textured study has been unseen for many years and is in need of restoration before it can be publicly displayed again.

Once raised, the money will fund the required conservation as follows:
·          remove the painting from its frame
·          clean the surface and repair any blemishes exposed after cleaning
·          apply a semi-matt varnish to address any unevenness
·          re-attach the painting onto a new, identical board
·          and to re-fit the painting in the newly cleaned frame.

We would love you to be involved in this project, and we are sure there is a workshop for you! You can support us by booking a place on your favourite workshop directly from the museum, and telling all your friends about this exciting project.

Places on the workshops cost just £5 per person and are open to all ages.
See what we’ve been up to so far at our blog secondmouth.wordpress.com/blog
And find details of all the workshops at our Facebook events page www.facebook.com/CreativeCopiesTwelve/events

We really appreciate your support, and we hope to see you there!
The Creative Copies team.'
Here's the list of activities: 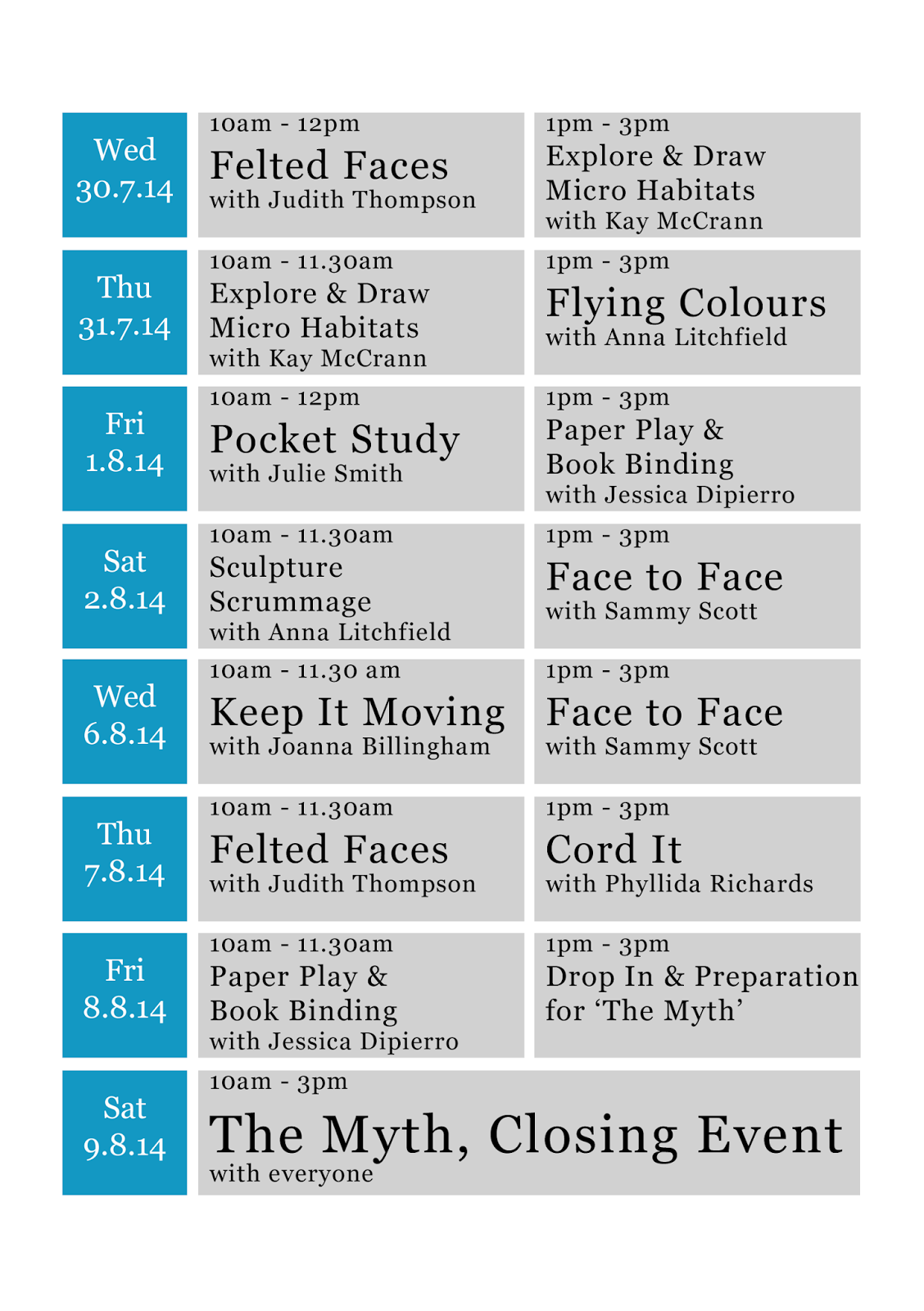 And the front of the flyer: 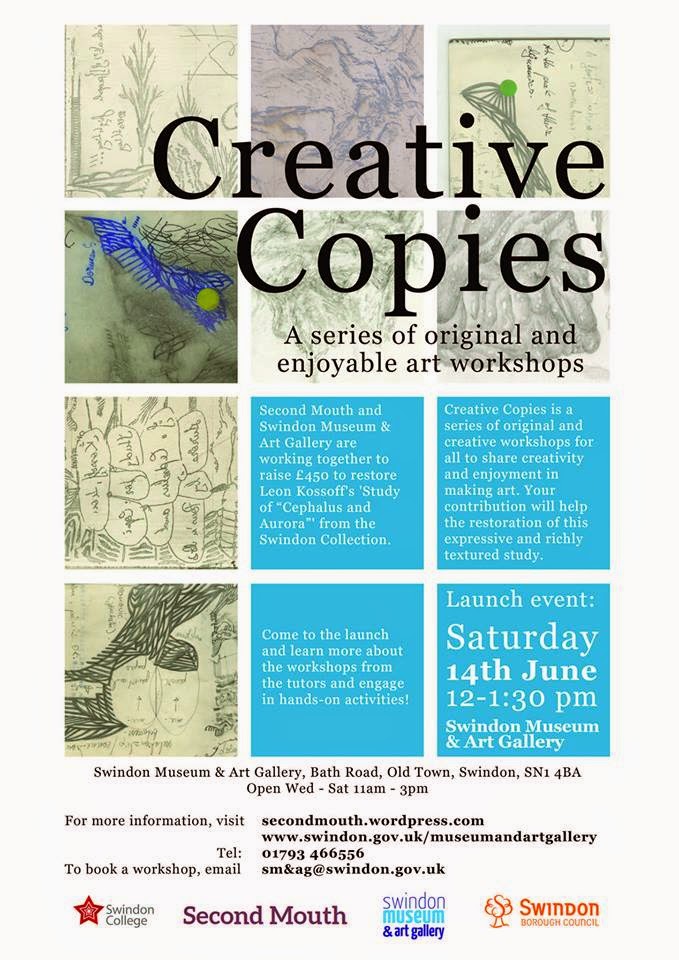 I went along to the Launch Event on the 14th of June and found lots of activities going on: 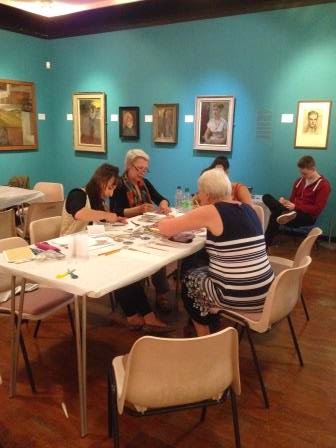 Including people drawing the Leon Kossoff: 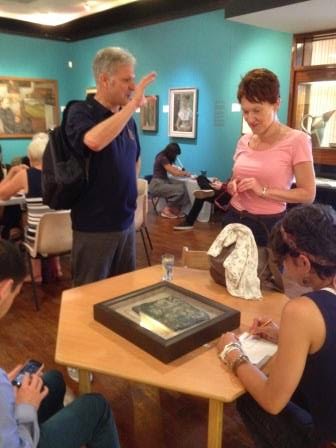 And here it is, although a better image can be found on the BBC site:http://www.bbc.co.uk/arts/yourpaintings/paintings/study-for-copy-of-cephalus-and-aurora-by-poussin-no-2-64596 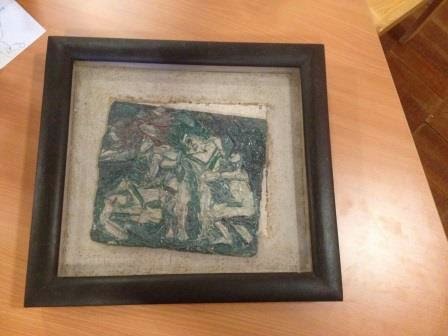 Hope to see you at one of the workshops.
Posted by Friendsof Swindon Museum and Art Gallery at 09:21 No comments:

It's been a while since there have been lunchtime talks, so this one was eagerly awaited, would there be a crowd in to listen to Sophie Cummings talk about the current exhibition of portraits - About Face? I thought it would be a popular time of day, there were others who thought not, in fact more than 40 people attended the talk, and seemed very happy with the talk and the timing.
Outside Apsley House, there was a sign encouraging people in: 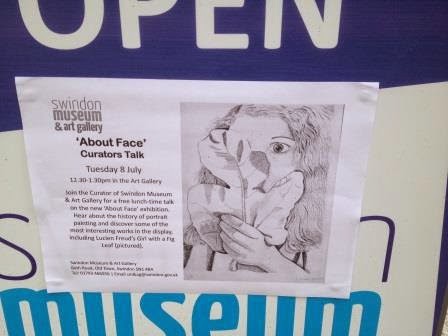 And here's the audience with Helen Miah introducing Sophie Cummings: 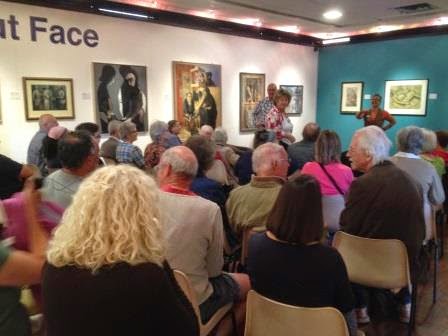 Who's there on the right of the photo at the front: 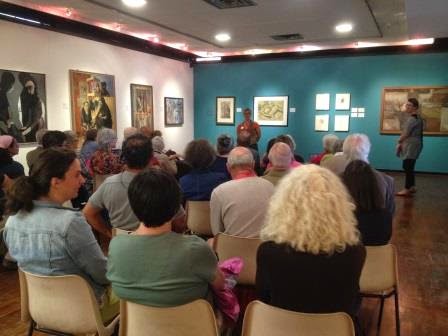 And another shot of the audience, and doesn't the gallery look superb with that colour on the walls? 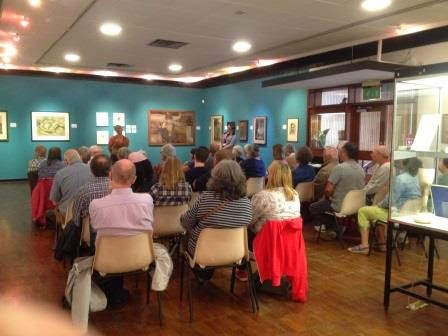 Sophie talked about the history of the art collection which now amounts to about 470 works, mentioning the importance of Lord Methuen who encouraged Swindon to have an art gallery followed by Jimmy Bomford who lent and then donated 21 art works initially and then more later after being given a bottle of champagne by Denys Hodson. Aided by Richard Morphet, Denys was able to add to the collection so we had an 'open ended network of connections'.
Sophie then moved on to considering the history of portraiture, before photography, it was an important way of depicting a person, although only available to a few because of the cost of it. With the advent of photography, portraiture continued to be popular because it captures the essence of a person suggested Sophie.
She then went on to explain why pictures had been selected to hang together in what is a superb exhibition. The talk concluded with 3 pictures being selected for a special mention, I think these may be Sophie's favourites at the moment, and I agree with her choice:
1. Michael Ayrton's 'Caged Birds' 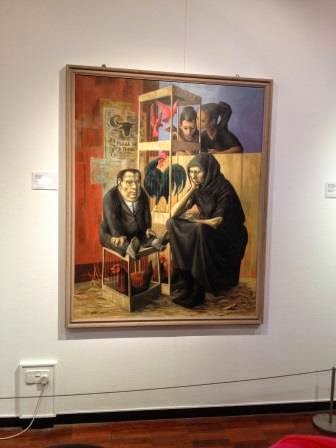 Followed by John Bellany's 'Self Portrait with Juliet' which is fabulous: 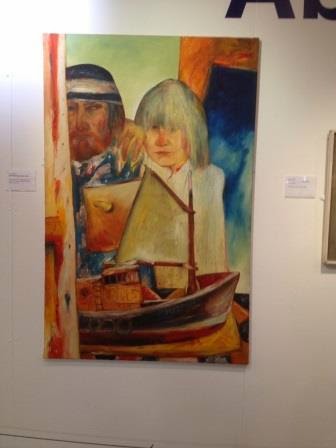 And also a Henry Moore which I wouldn't have looked at so closely if it hadn't been pointed out: 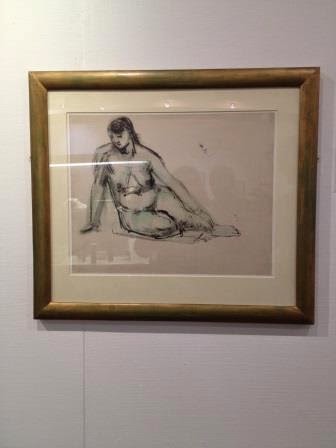 It's 'Seated Figure' 1927 in crayon, ink and green wash on paper, and it was donated by HJP Bomford in 1946.
Finally a few people asked questions, and then we milled about and talked to each other: 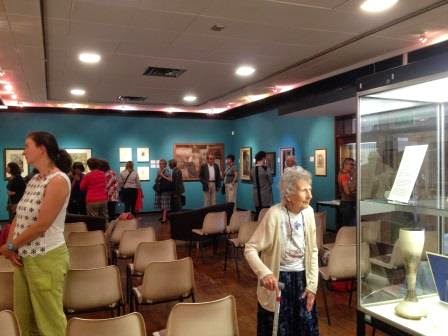 Sophie gave a very interesting talk from a personal perspective which did what I think such talks are intended to do, made the exhibition more accessible.
With 3 changes of exhibition per annum, we may have more of these talks, it's certainly worth looking out for them and coming along.


Posted by Friendsof Swindon Museum and Art Gallery at 14:13 No comments: