I was lucky enough to have had the foresight to buy tickets well in advance to hear this talk which covered Turner's explorations and images of the region, including Bath, Malmesbury, Salisbury, Stonehenge and Fonthill. The talk given by Sam Smiles was engaging, informative and fascinating, and knowing nothing about him, I thought I'd do a quick Google search on him, and found the following quote:
'The artist I’m most obsessed by is Turner; he gets me up in the morning – painting pictures which he knew were going to be misunderstood, and carrying on painting them without making any compromise, absolute refusal to temper what he believed was important to say in the interest of the public reaction.'
The talk was accompanied by a great selection of slides of Turner's paintings and drawings, which Sam Smiles used to good effect, giving many pieces of information about all the paintings. Turner apparently liked to do a pencil drawing on site and then finished it with the watercolours at a later date, possible because of his great ability to visualise and remember colours. He also enjoyed using the latest colours to be produced and made notes about them in the 1820s. In some of his paintings, there is a hoop in the bottom of the painting, is this a form of signature he wondered.
How lucky we were to be in the presence of a great speaker who gave us such a feeling for the artist. 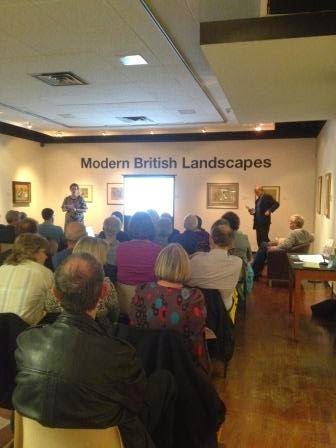 I took a photograph at the beginning, Sophie Cummings, curator at SM&AG is on the left introducing the talk, and Prof Sam Smiles on the right.

Posted by Friendsof Swindon Museum and Art Gallery at 13:31