Reminder about the Talk by Jeremy York on Thursday 26th February at 7.30pm

Come along on the night by 7.15pm to buy tickets on the door, or phone the museum in advance, and reserve a ticket, or buy one in person on Wednesday or Thursday between 11am-3pm This promises to be a really interesting talk.
Posted by Friendsof Swindon Museum and Art Gallery at 08:44 No comments:

Sophie Cummings, our Curator gave this talk in time for Valentine's Day on Friday 13th of February. Champagne and chocolates gave the talk a festive feel.
The first slide was this one: 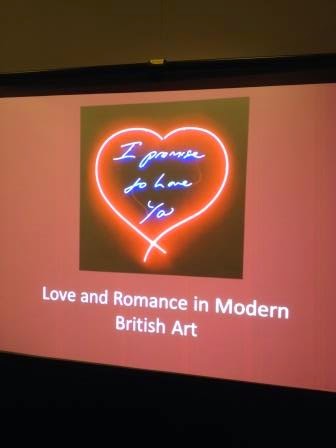 It's a Tracey Emin neon picture which I liked a lot, there was another which said 'Those who suffer love', or 'Those who suffer, love' or Those who love, suffer' .
Sophie was looking at depictions of love and romance via art, and  included Vanessa Bell's 'Nude with poppies', Gwen John's 'Woman with a Black Cat'.
Maybe the best is John Bellany's 'Self Portrait with Juliet'.
It was a thoroughly enjoyable talk, with more champers on offer afterwards.

Posted by Friendsof Swindon Museum and Art Gallery at 14:35 No comments:

Lisa Milroy - On the Pleasure of Painting

We were fortunate enough to be able to hear Lisa Milroy RA talking at the museum on Monday 2nd of February at 6.30pm;  known for her paintings of everyday objects and locations, her talk was very well attended ‘Small objects’, which features in the current exhibition, shows her unique take on still-life painting, and is seen here: 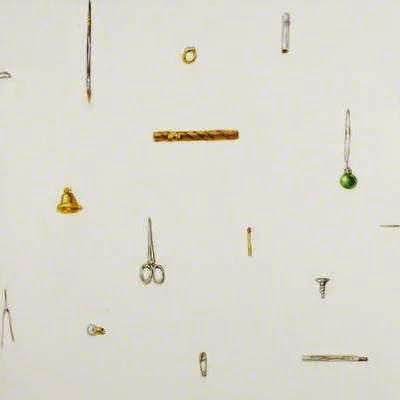 I made notes during the talk, but 2 weeks on, unfortunately they appear disjointed. Lisa talked a lot about William Haslett and has been much influenced by his writings. She works from a mental image, and is passionate about her work, at one time completing a piece of art every day.
She is also  Head of Graduate Painting at the Slade School of Fine Art.
I took a photo of a piece of work she had on the screen which depicts dresses on a dress material background entitled 'Party of One' 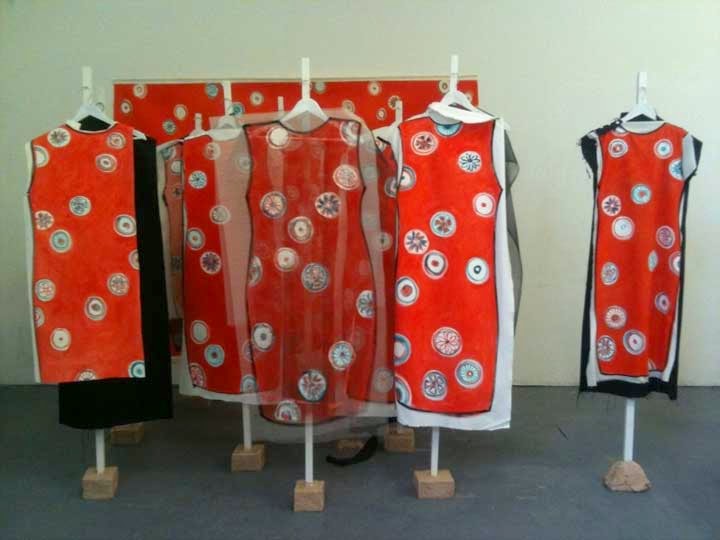 I was a bit late on the crowd photos as well, here Lisa can be seen with her laptop: 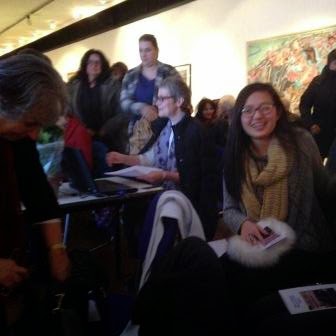 And below and little later: 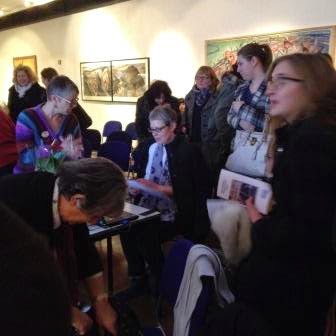 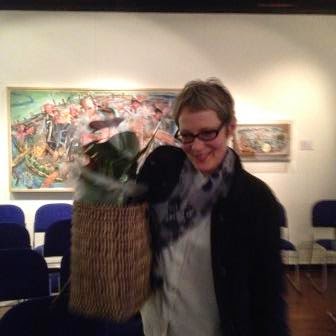 I thoroughly enjoyed hearing Lisa talk, and the very fine question and answer session afterwards. It's well worth looking to see what talks are being held because they're too good to miss at the  moment.


Posted by Friendsof Swindon Museum and Art Gallery at 14:23 No comments:

An Introduction to British Contemporary Art - talk by Sophie Cummings

The first of this years museum talks was a great success, on a cold and miserable evening, thirty five people came to hear Sophie Cummings give an introduction to British Contemporary art. Sophie gave a thought provoking and interesting perspective on the subject, starting by saying she was going to be talking about art from the 1980s onwards, although it could be argued she could have brought the date forwards or backwards.
Sophie began by talking about some of the great works we have from this period, including Jeffery camp's 'Burling Gap' which has been lent to the Holburne: 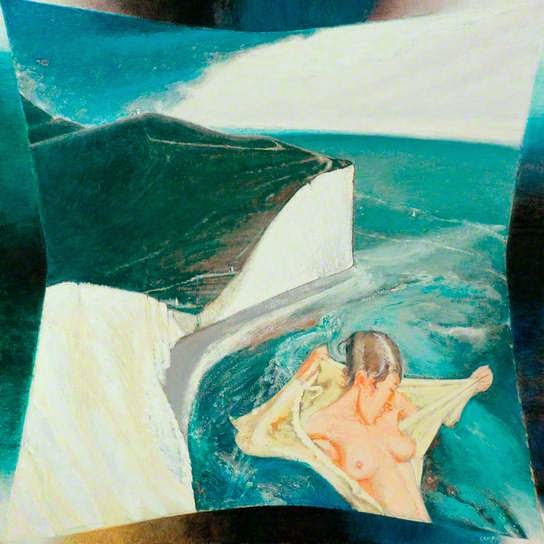 And Timothy Hyman's 'The Stripping of London' is hanging in the current exhibition: 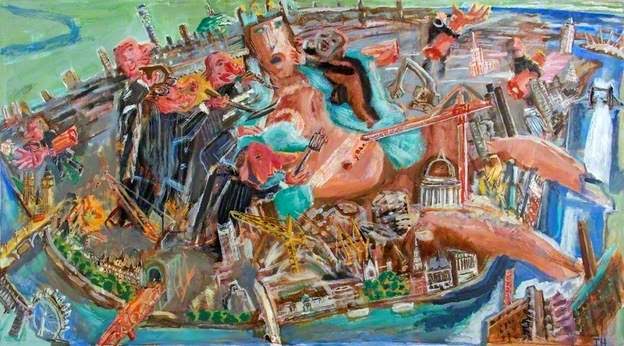 Sophie went on to consider the gaps in the collection, and showed us a few artists who could have been chosen, including Chris Ofili's 'Afronirvana' from 2002. It looks fabulous: 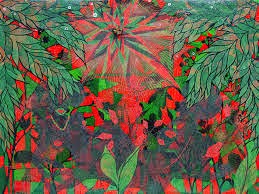 Sophie spent some time considering what work we should be acquiring now, and talked about some of the latest works she has selected, some of which are in the new exhibition.
I took a random photo of the audience after the talk: 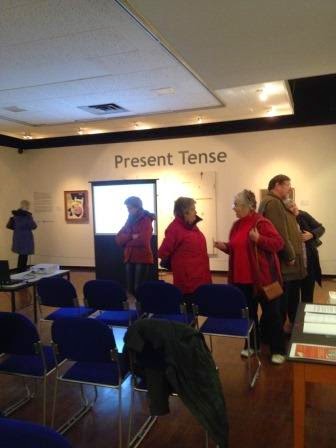 And we very much admired the new chairs which are comfortable, hook together easily and twenty can be stacked together. 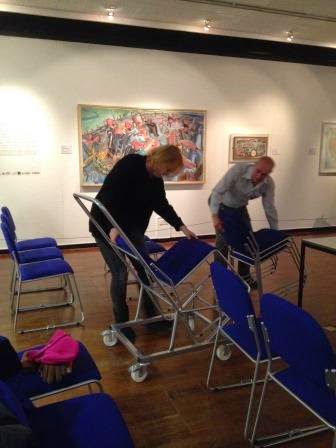 Here's a  stack of chairs 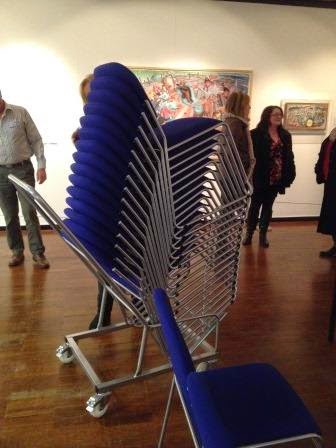 The Friends contributed towards the cost of the chairs, and I think we'll all feel the benefit during talks.
Tomorrow 2nd of February, Lisa Milroy talks about 'The Pleasure of Painting' at 6.30pm.


Posted by Friendsof Swindon Museum and Art Gallery at 13:28 No comments: