Continuing the fascinating series of talks by artists organised by Curator, Sophie Cummings to accompany the current exhibition, last night we were fortunate enough to hear John Greenwood's wry take on life, art, college lecturers and his working methods.
John started by saying that he was going to show 90 slides to illustrate what he was saying, and was happy for people to ask questions as he talked. He started with this slide: 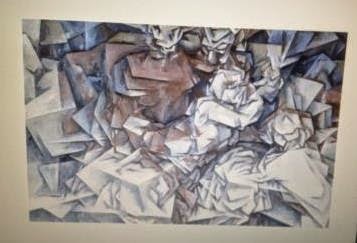 This was painted during his time at Cheltenham where he felt he was meant to be looking at Cubists; he didn't use colour because he'd been told he wasn't good with colour and should avoid using it. After his time at Cheltenham, it was another 6 years before John wanted to be an artist again, and 4 more years before he used colour in his work.  After reading 'The Northern Romantic Tradition', he went to the RCA and studied in Paris where his work became more surreal, and illusionary. After Paris, John had a piece of work bought by Brian Sewell from his degree show, when Charles Saatchi saw it, he bought it off Brian Sewell and commissioned 6 more paintings from John, who despite this success found it hard to compete for attention as a YBA with 'sharks in tanks'.
In Cheltenham it seemed 'flatness was everything', but John's work became anything but flat, some of the slides of paintings appeared to be objects dangling in a box, they looked so three dimensional.
Currently John enjoys spending the majority of his time in his studio drawing, and some of the drawing are worked up and become paintings, his latest ones appear in the C&C Gallery.
This is the one we have: 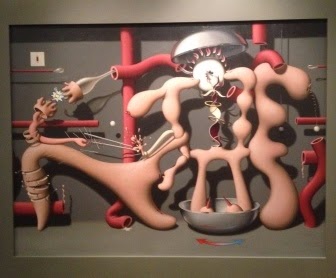 It's called 'Rings and Strings and Things'. After the talk which I found fascinating, engrossing and illuminating, there was a lively question time, followed by the Friends' social which was of course open to everyone present. Friends had been invited by email and asked to say whether they could attend, if they said they could come, I wrote out labels with their name on so we can begin to put names to faces. I thought it was really worthwhile and hope we can have more, unfortunately I didn't take many photographs, so only have these two, the refreshments table: 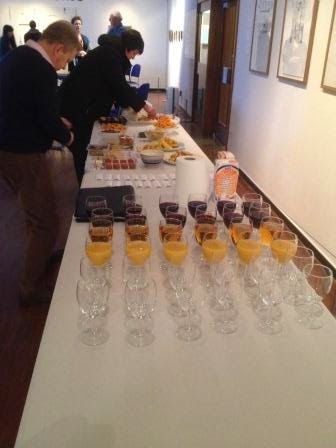 and people starting to come in for the talk. 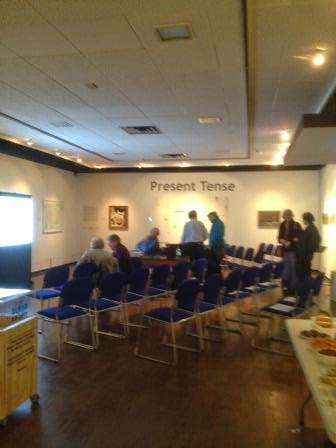 Apologies for not taking a photo of John Greenwood or the full house.

Posted by Friendsof Swindon Museum and Art Gallery at 16:07