I was really pleased to book James Russell, curator of the current Ravilious exhibition at the Dulwich Picture Gallery, to come and talk to us about the artist Eric Ravilious. He proved a very popular choice of speaker, all tickets were sold for the talk, and we had to send about twenty people away.
I will say something about his talk here, but by visiting his blog, you can watch 3 videos about the current Dulwich exhibition, and get an idea of what an insightful speaker he is.
So please click here for a link to his blog.
I wish I'd taken more photos, but there was so much going on that night that it was hard to concentrate on photos. There were lots of new people joining the Friends and we were taking the second payment for the trip to Dulwich on July 10th.
I took a photo of the computer screen before James' talk: The lovely Westbury white horse with a train in the background, and below James talking to a full house: 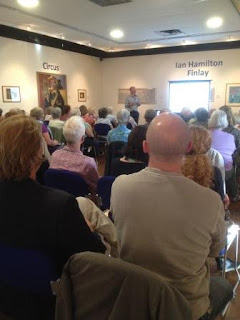 I've made a few notes, so I'll include them here.
Ravilious went to the Royal College of Art and was a contemporary of Henry Moore and Edward Burra. At this time, there was a resurgence of watercolour painting, and Sell Cottman was a great favourite of Ravilious. At the RCA he was taught by Paul Nash, along with Edward Bawden. Ravilious started by doing wood engraving, there are some in the Dulwich exhibition, it's a good way of illustrating books and newspapers. His wife, Firza was also a successful wood engraver, although she gave this up when they had children.
Ravilious loved the countryside around Wiltshire and liked staying at Oare House, open this year coincidentally on June 28th under the NGS scheme. He painted this atmospheric and cleverly executed painting in the vegetable garden: 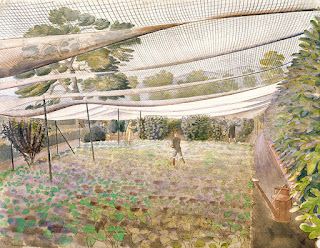 It's called Strawberry Nets, the hills of Pewsey Vale can be seen in the background.
Ravilious wanted to be modern, quirky and unusual, so he painted avoiding green, substituting brown  where he could do so.
Peggy Angus another RCA artist was a Scottish communist who lived for years in half a cottage called Furlongs, close to Eastborne in a place called Furle, many glorious paintings were produced here. The glorious Mr Humphreys'greenhouse paintings were painted at nearby Furle Place.
Some memorable paintings were produced in a year of traveling around the border country around Capel y Ffin, Wiltshire and back to Eastbourne. He also painted around Castle Hedingham where he lived for several years, and where there's a memorial to him.
He sadly died in 1942 in the second world war over Norway where he'd gone for the fabulous midnight sun, aged just 39.
The children's book he was working on when he was killed was recently found and bought by the Devizes Museum.
I am really looking forward to the Friends' visit to the Dulwich Picture Gallery on Friday, it will be a real treat.


Posted by Friendsof Swindon Museum and Art Gallery at 14:54