I happened to be visiting the museum on the day Enid Mitchell was being photographed in the museum for this story about her Diana Dors bronze sculpture, I took these photos in the museum: 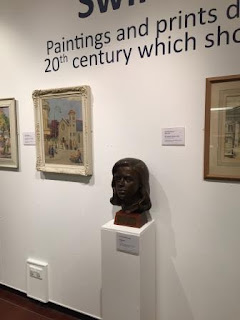 Below Enid Mitchell with the sculpture: 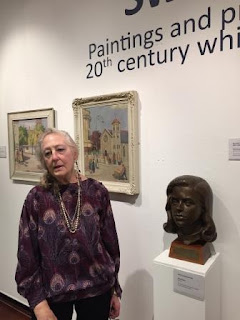 I  copied information on Enid Mitchell and the Diana Dors sculpture from the museum's website
It appears below:

''A bronze sculpture of Diana Dors has been given a new and permanent home at the Swindon Museum and Art Gallery in Bath Road, the very same road where the star went to school.
It was made by artist Enid Mitchell, who became a great fan of the actress after seeing her only performance on the stage of the Wyvern Theatre. Enid remembers the flamboyant star singing ‘Hey Big Spender’ while dressed in a black kaftan, and was inspired to create the sculpture in 1988, four years after Diana Dors’ death, when she realised that Swindon had no memorial to one of its most famous daughters.
When Enid decided to make the bronze she had to appeal for the money to pay for it on a television news programme, which proved successful after a property developer came forward. She then created the sculpture from memory and photographs.
The work was unveiled at the Wyvern Theatre in 1988 and was on display in the foyer for many years. In 2013 it went to the Central Library until being re-housed as part of the Museum and Art Gallery’s Swindon Collection, which holds objects relating to the history and development of the town.
Enid Mitchell was born in the East End of London but has lived and worked in Swindon since the 1970s. During her career, she has made sculpture and ceramics of many famous and notable people.
Stefanie Vincent, the Collections Manager at the Swindon Museum and Art Gallery said: “It’s very fitting that this sculpture of Diana Dors is now part of the Swindon Collection. It is now only a short distance from where the young Diana Fluck, as she then was, was educated for a time at The Selwood School.
“It’s easy to forget just how big a star she was in her heyday, and the sculpture captures her at that time in her life. Her story is a classic example of triumph and tragedy, and she was still relatively young when she died of cancer at the age of just 52.”''


Posted by Friendsof Swindon Museum and Art Gallery at 09:46