Michael Gray talked about Brightwen Binyon to an audience of about 37. I didn't take notes, and because the chairs in front of the screen were all taken, I was unable to take any decent photos. I'll put up some of the photos I already have.
What impressed me about Binyon was his output in terms of building commissions he received, and executed. Based in Ipswich, he became known in Swindon as someone who could design schools, so his services were required there first of all, then he was used when the Mechanics Institute needed remodelling; £14000 was spent on that, compared to £9000 available a bit later on when a Town Hall was required. Our Town Hall has an out of proportion, elongated tower on it because it needed to be higher than the tower on the Corn Exchange. 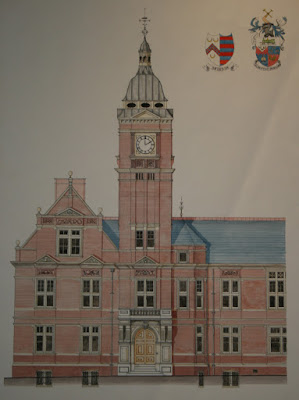 If you compare it to the original plans, you can see the shorter, stockier tower 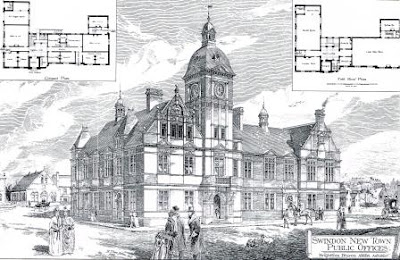 Michael included a lot of interesting historical detail about how the country was changing in the later 1880s, people were spending money on luxurious buildings in seaside resorts like Felkixstowe, Binyon designed Seaside Villas, still standing today in 1888: 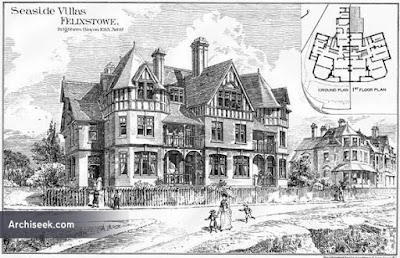 They are a pair of semis built on a grand style.
He also became involved in some interior decoration, and designed this lovely wallpaper: 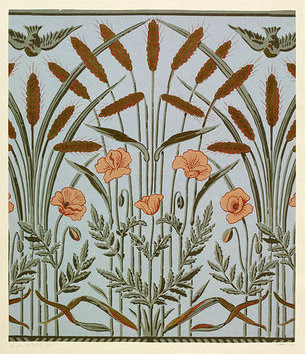 Amazingly enough Binyon fitted this amazing output into a comparatively short life, he died aged 59 in 1905 leaving a fabulous legacy of his buildings behind him.
Michael then answered a few questions relating to the demolition of buildings like these across the country in the 1970s when they were no longer appreciated quite so much.
Thoughts of course turned to what sort of building would be suitable for our new museum and art gallery in the Cultural Quarter of Swindon beside the Wyvern Theatre.
I did manage quite a good photo of Michael at the beginning of his talk: 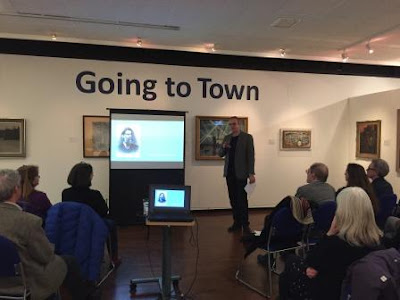 We are fortunate to have Michael's architectural expertise, and now as  member of the Friends we can see even more of him!
Also we are hoping to have a larger screen, it was pointed out that this one is far too small.

Posted by Friendsof Swindon Museum and Art Gallery at 14:04