I thought I'd have a look at Tim Hyman's paintings on the Internet last night so I could illustrate Facebook posts encouraging people to come along to his talk.
These were my top four paintings: 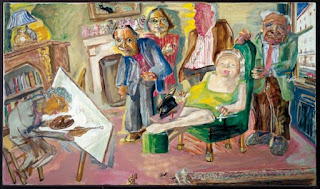 Above 'Painting the Family', and below 'A Thousand Miles a Day' 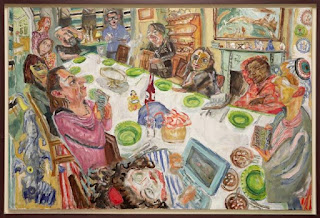 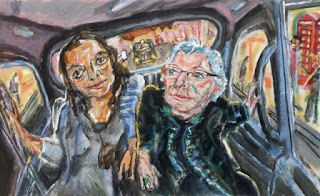 I also loved this one: 'Maggie's House- Winter night' 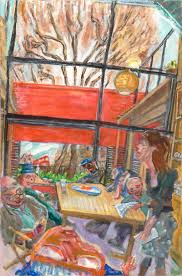 Hope to see you on Thursday evening, can't wait to find out more about Tim.
Posted by Friendsof Swindon Museum and Art Gallery at 15:25 No comments:

We were really excited to be attending the opening of the new exhibition of work by Eileen Cooper RA in the main gallery on Tuesday evening. Lots of people attended, the canapes were tasty, and the 'Hide and Seek' exhibition looks fabulous in the gallery.
It was great to see so many people chatting to those they knew and meeting people they didn't, a good networking opportunity.
I took a few photos of people rather than the exhibition, more on that in another blog post when people have had a chance to have a look for themselves.
On the way in: 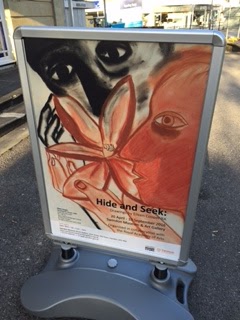 Council Leader, David Renard talking about how pleased he is to see Eileen Cooper's exhibition in Swindon Museum and Art Gallery, with Erik B-G's ear and check shirt partly framing the picture. 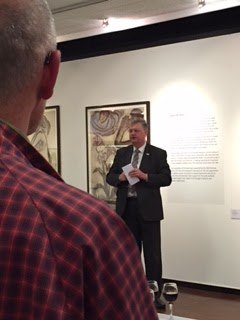 Below a great shot of Ray Ward 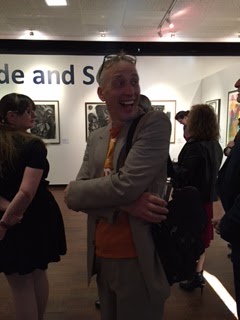 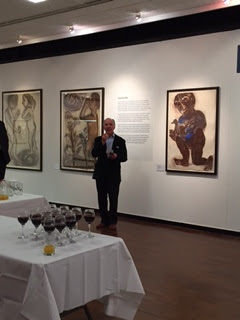 And the star of the evening, Eileen Cooper talking about the painting behind her among other things. 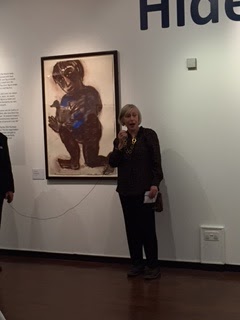 Eileen Cooper will be coming to talk about this exhibition on May 12th at 7.30pm, and before that there will be a special social with Eileen for Friends from 6pm. You will need to book for both these events.

http://swindonlink.com/2016/04/swindon-museum-art-gallery-hosts-major-exhibition-by-royal-academician-eileen-cooper/
Posted by Friendsof Swindon Museum and Art Gallery at 15:02 No comments:

Our talk last Thursday 31 March was by Mark Golder, a collector, he gave us the title 'Private Passion, Public Face, and began by talking about the fist half of the title; how he became a collector. Mark is a passionate collector and talked amusingly and fascinatingly about it for the first half of the talk. Here we are waiting to start : 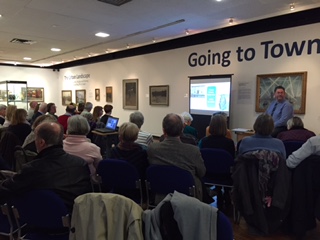 Mark tried making ceramic pots, but found he couldn't achieve the results he had hoped for, so he began collecting them. He began with ceramics because they were cheaper than bronzes, and he was influenced by other collectors he cited particularly Sir Alan Barlow, an oriental ceramics collector, Helen Barlow who in 1978 donated work and said 'If you've got it, share it'. Marina Vaizey also advised him where to go to begin collecting.
In addition to ceramics, Mark also set up a fund to buy Scottish prints for Pallant House Gallery, and then moved onto English prints, choosing Royal Academicians' work.
At home, positioning ceramics and pictures has been practicised as an art form in itself, Mark showed us how he positions ceramics according to texture together. They stay there for up to 5 years, after which time they are replaced by other arrangements. 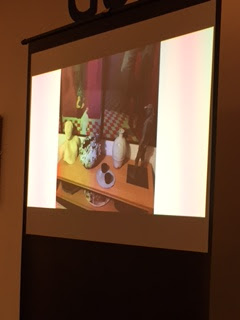 I've included two, although I don't think you can really see that much, but you get the idea. 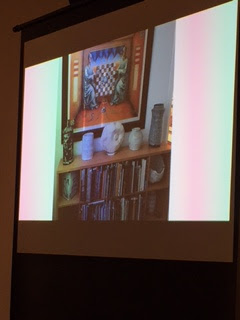 Mark has collected the work of some 140 different artists, and bought up to 12 pieces from each one. When he first saw Edmund de Waal's ceramics, he bought 12 pieces at once, and although they have increased hugely in value, Mark would never sell anything he's bought, preferring to share it with others by donating pieces to Swindon Museum and Art Gallery and Pallant House Gallery
The second half of the talk moved onto the pieces donated to SM&AG recently. This was also a fascinating insight into what Mark liked about pieces, and I saw them anew, and went to photograph them in the art gallery cases the next day.
Here they are starting with 2 Edmund de Waal's: 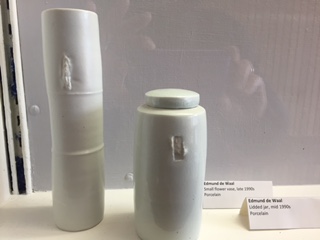 Below are 2 pieces by William Plumptre from the Lake District, but much influenced by Japanese ceramicists. 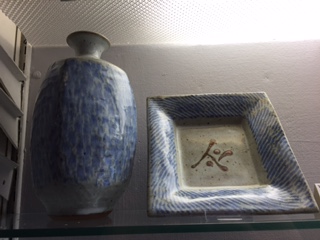 This is a geometric stoneware vase from 2010 by Sun Kim. 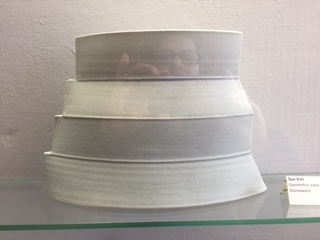 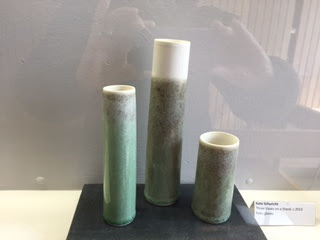 Above 3 vases on a stand with Raku glazes by Kate Schuricht c 2013 which were so pleasing because of the green colour in the glaze as well as the shape of the vases. 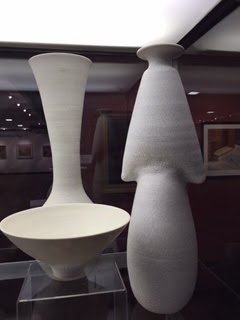 Above three white pieces, Mark said 'some whites are exquisite, they enable you to look at form'. The 'Figurative Form' piece by Bruce Chivers is particularly memorable. The bowl is by Peter Wills, and the other earthenware vase by Martin Clark.
Below is a fabulously coloured footed porcelain bowl by Eddie and margaret Curtis 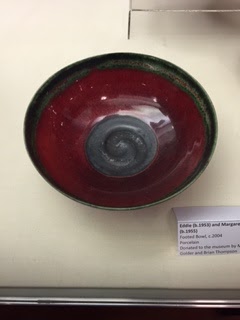 And the other piece donated by Mark which caught my eye was this vase which from where I was sitting for the talk looked black, but certainly isn't, do go and have a look at the colours. It's a stoneware with glaze vase made by David Frith c 1998. 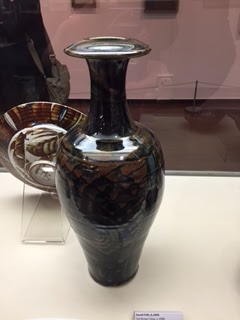 A really enjoyable evening, thank you Mark. He has offered to return, so if you missed him last time, come and sample his infectious enthusiasm.

Posted by Friendsof Swindon Museum and Art Gallery at 09:26 No comments: