New exhibitions in the Gallery

The two exhibitions in the main gallery at the museum are 'new' in that they've only been up for over a week, the main exhibition is: 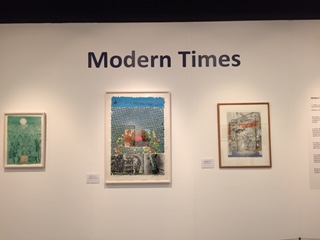 Modern Times: How the School of London changed British Art

During the 1950s and 1960s, a group of painters transformed the British art world. With their connections to the capital, its art schools and galleries, this group were called the School of London and comprise some of Britain’s most significant modern artists. Their bold, representational painting continues to inspire and captivate visitors.
I took the following information from the Tate's website:


Introduction to School of London
In 1976, at the height of minimal art and conceptual art, the American painter R.B. Kitaj, then based in Britain, organised an exhibition titled The Human Clay at the Hayward Gallery in London. It exclusively consisted of figurative drawing and painting, which proved to be highly controversial to an art world which was dominated by abstraction. In his catalogue text, Kitaj used the term School of London loosely to describe the artists he had brought together. The name has stuck to refer to painters at that time who were doggedly pursuing forms of figurative painting.
The chief artists associated with the idea of the School of London, in addition to Kitaj himself, were Michael Andrews, Frank Auerbach, Francis Bacon, Lucian Freud, David Hockney (although living in the USA), Howard Hodgkin, and Leon Kossoff. The work of these artists was brought into fresh focus and given renewed impetus by the revival of interest in figurative painting by a younger generation that took place in the late 1970s and the 1980s (see neo-expressionism and new spirit painting).

The exhibition includes work by many of these artists, including a self portrait by Lucian Freud on loan from somewhere.
On Friday 24 February, Curator Sophie Cummings gave her first free lunchtime talk on this fascinating exhibition. I'll include some photos: 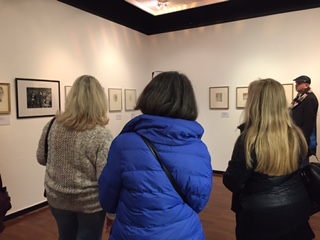 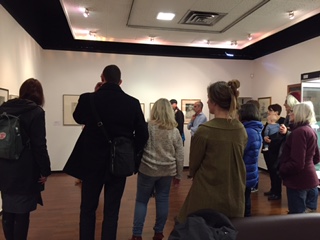 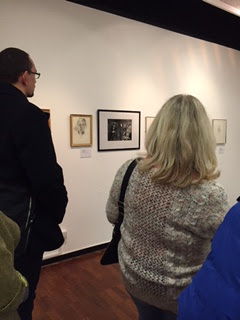 As you can see there was quite a crowd at the talk, making it difficult to see Sophie and the particular works she was talking about. In the last photograph, you can 'see' the Lucian Freud self portrait to the left of a photograph of Lucian Freud with Frank Auerbach
The other smaller exhibition displays paintings donated by Jimmy Bomford, between 1943 and 1976, local art collector and landowner HJP (or ‘Jimmy’) Bomford gave 21 works of art to Swindon. These were instrumental in encouraging Swindon to establish a modern art collection for the town, we owe him a huge debt of gratitude, and love to think he would be pleased about the plans to move the collections to a more suitable location in the centre of town, beside the Wyvern Theatre. 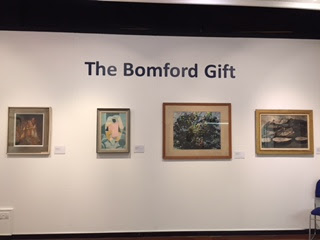 You can see the exhibition Wednesday-Saturday 11am-3pm.
The next free lunchtime talks, held from 12.30-1pm, are as follows:
24 March The Bomford Gift
28April Modern Times and The Bomford Gift
26 May Ron Sloman Ceramics- a talk about the 50 pieces of ceramics donated by Mark Golder and Brian Thompson in memory of their friend Ron Sloman.
They are well worth attending for a greater insight into the works, the artists and what influenced them.

Posted by Friendsof Swindon Museum and Art Gallery at 03:07