'Order from Chaos' by Stef Vincent

For the last 3 years, Stef Vincent has been the Museums Collections Project Manager, taking on a variety of HLF funded projects with the aim of discovering, documenting and interpreting the objects stored by SM&AG. Last Thursday evening, Stef gave a hugely entertaining and enlightening talk about some of the challenges she's faced over the last 3 years, demonstrating the fact that we're extremely lucky to have her in charge of ordering the chaos.
There were some interesting things from the stores that Stef had laid out to give us an idea of the nature of some of the artefacts. 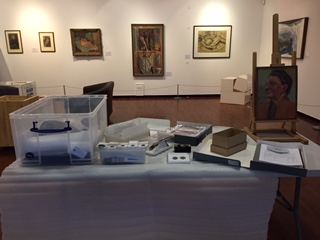 I was interested in this piece which is ornamentation from a harness, it still has some of the enamelling on it. I'll ask Stef about the age. 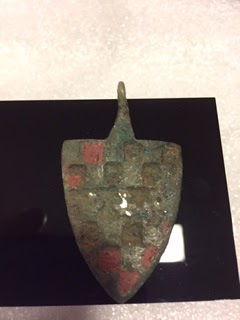 You may have seen in yesterday's Swindon Advertiser, an article about the fact there are now 2 human Egyptian mummified hands, seen below. The article is written by Tom Seaward, who not only showed a great interest in the talk, but also joined the Friends that night. 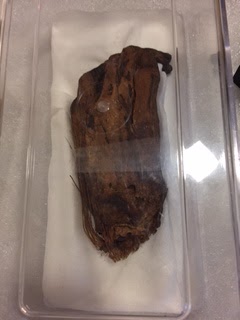 They are apparently both left hands. 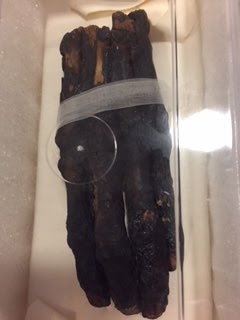 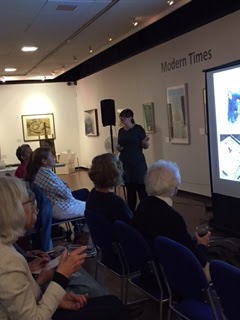 Stef said that there's always a question about how many objects there are in the 5 large storerooms, the answer is there are probably 100000, and this number will double in the next 5-7 years as archaeological finds are made when the eastern villages are built.
It's not just a matter of straightening boxes and cataloguing what's in them, Stef has to understand, centralise, care for and let us all know what's in the stored collections. Charles Gore, a significant collector of minerals and fossils, has the amazing accolade of having the museum founded to hold his collection; he's also had 2 ammonites named after him.
There can be a problem with chemicals such as mercury, arsenic and silver used to preserve materials in the herbarium.
I was intruiged by the 38 wall paintings from Burderop House which can't be displayed until they are in a more stable condition and have been conserved, this would cost approximately £120000. 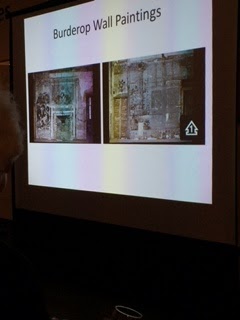 Sometimes things are wrongly labelled, such as The Black Sea Coast painted by Roger Fry
seen below: 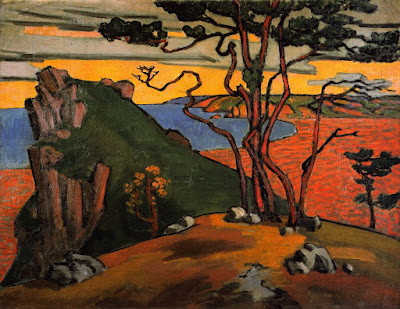 It in fact depicts Studland Bay!!
A member of the audience asked about handling things, and some things can be handled, this will be built into exhibitions at some stage.
There are 35 people who have contributed to this work by volunteering, 5 of those have gone onto paid employment as a result of their experience in Swindon.
Stef mentioned the Kate Tryon paintings which spent many years at the Richard Jefferies Museum, Stef gave a lunchtime talk on these a few months ago, and we were able to see them being conserved. 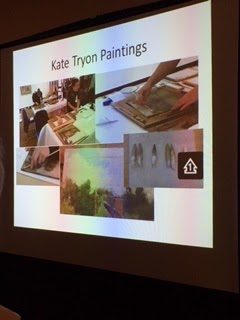 I'm pleased that our organisation, the Friends of SM&AG have been able to contribute to both HLF funded projects Stef has been involved in.
The talk ended with questions form the floor, but not before Stef recommended this You Tube video about the conservation of the Carleton Atwood bust of Alfred Williams. It's well worth watching, please click here:https://www.youtube.com/watch?v=OOaTKZGjZWU


Posted by Friendsof Swindon Museum and Art Gallery at 13:34