Peter Waldron's Talk about his exhibition

Peter's exhibition entitled 'Odyssey' runs until 18 November in the sectioned off part of the main gallery upstairs. The museum's website, says 'his bold, abstract paintings are inspired by the rhythm, colour and energy of natural forms. This exhibition explores the artist’s life and career to date and brings together a selection of his paintings and drawings'.
I'll show you a selection of the work on display, although if you haven't visited the museum to see, it's well worth a trip. 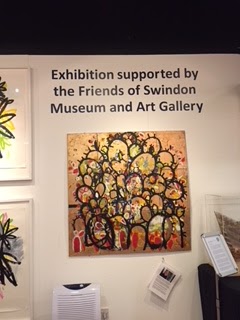 It's also good to see that the Friends supported this exhibition, and are also supporting the next exhibition, the first for 40 years of Janet Boulton's paintings 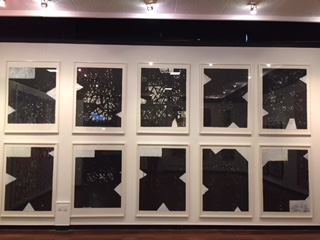 Peter gave us a lovely biography, the cacti with additions are a theme running through his work form the beginning. He brought with him a great abstract painting of Avebury, and several others which Ray Ward and myself held up for the audience to see. 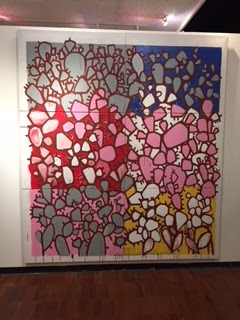 Below are some of Peter's paintings of flowers 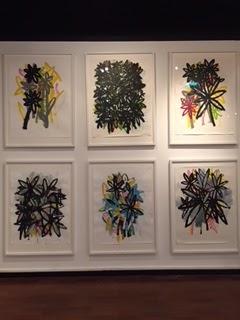 and here are a series of abstract shapes in red, black and white. 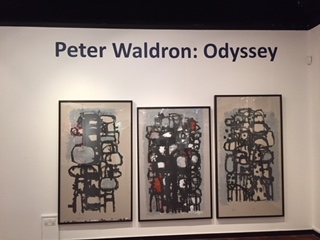 I'll add some photos taken during the talk before adding notes about Peter's talk: 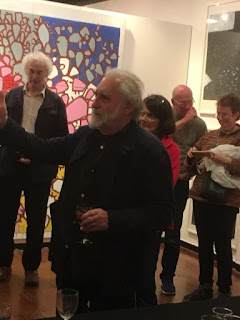 The above photo is courtesy of Marion James, and shows Peter talking in the front
Below Peter talking about the paintings he brought with him: 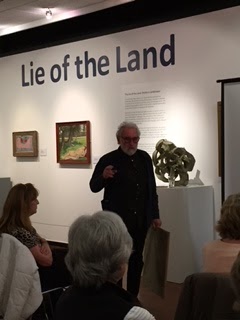 Ray holding up a picture 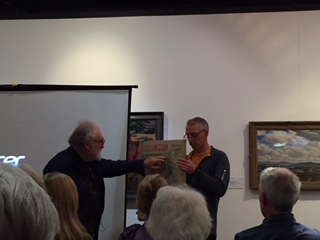 Peter going round his exhibition: 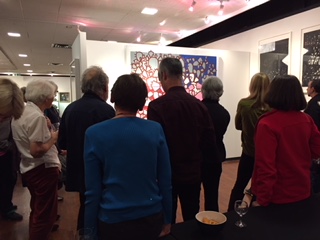 Peter was born in 1941 in Swindon, on reaching school leaving age, he was given 3 choices of career because there were 3 major employers in the town at that time, they were GWR, Garrards and Plesseys. Peter was apprenticed to work at Plesseys from 15-21, because his father worked there. He was working with metal and wasn't happy until he discovered life drawing evening classes, he ended up going to 3 classes a week.At 21, Peter was able to take a foundation course in Swindon and had the most wonderful teachers, including ceramicist Peter Burgess whose work is currently displayed in the museum. From there he applied to Chelsea where he met and worked with Patrick Caulfield, John Hoyland and Bridget Riley at Space
Peter became interested in the idea of going to Crete, and visited many times before buying a house in Myritos in 1989, he spends form February until October out there.
He also praised Keith Murray at Wedgewood who encouraged him to do linear paintings. He's currently enjoying using gilding in his painting.
I very much liked this, he said: 'Good art has energy, vigour and mystery'
A bit like Peter really.

Posted by Friendsof Swindon Museum and Art Gallery at 11:29