First Trip of the Year to London

Our first trip of the year on Monday was to London by coach. We were picked up opposite the Co-op in High St, Old Town and dropped off at Tate Britain two hours later after a trouble free trip. Some of the party had booked tickets to see exhibitions, but I went to have a look at the nearby  Garden Museum before going into Tate Britain. The Garden Museum of the art, history and design of gardens  housed in St Marys Church, Lambeth has been spectacularly adapted for its use as a museum, so I thought I'd look up how much funding it has received from the Heritage Lottery Fund.
Initially a grant of £3.5 million enabled an increase in the number of galleries and many other improvements, have a look here in 2014, and then in 2017 a further £7.5 million of HLF money was spent on an extension to create a cafe and a garden by Dan Pearson.
I thought the building, a former church, deconsecrated in the 1972 and earmarked for demolition, was fantastic. The atmosphere is wonderful, and there's so much to see. I'll give a brief idea of my favourite parts, I do recommend a visit. 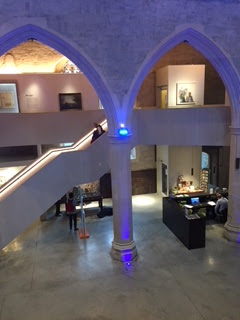 Looking down from the first floor where the permanent displays are held. 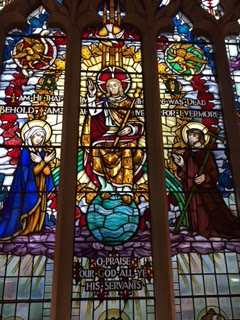 The windows are fantastic, including the one below, a John Tradescant window, although I can't find out anything about this particular window. Many of the stained glass windows were damaged and have been replaced by clear glass: 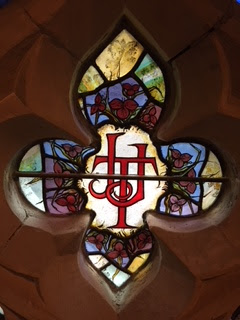 There's also some great art - gardeners, this one below 'Portrait of a black gardener' c 1905, by Harold Gilman (1876-1919) The information beside the painting says it's one of the most heroic depictions of gardening in art. Gilman was a gardener, and a poineer settler of Letchworth, the world's first garden city. Although there were black gardeners at this time, the figure may have been an artist's model 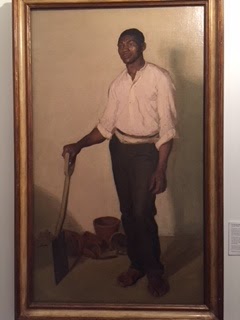 and greenhouses and garden produce  painted by Paul Nash c 1930. Nash painted artichokes, apples and figs packed for a billboard commissioned by the Empire Marketing board, set up in 1926 to encourage people to buy products from Britain first and colonies second. The billboard declared that 450,000 tons of fruit grow in British orchards each year. 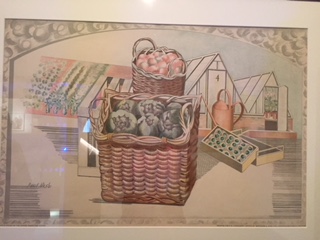 From the Garden Museum, I went for lunch at Tate Britain and then had a wander round the galleries. Duncan Grant's 'Bathing' painted in 1911, it's fabulous, and was painted as part of a decorative scheme for the dining room at the Borough Polytechnic, London. The design was inspired by Michelangelo's male nudes and summers spent at the Serpentine in Hyde Park.
The painting attracted a lot of attention, in particular a visitor to Britain loved it and was eagerly anticipating her visit to Charleston. 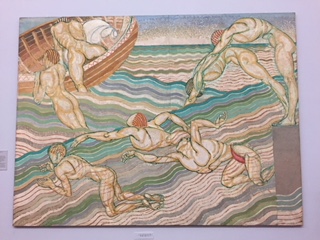 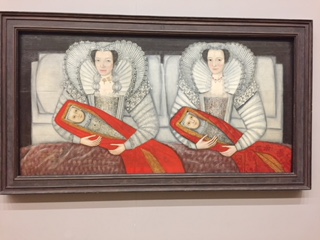 It's painted on wood, on what appears to be 3 pieces of wide floorboards. The women were born on the same day, married on the same day and had babies on the same day. They look identical, but there are subtle differences between the women and their babies.


Posted by Friendsof Swindon Museum and Art Gallery at 14:27 No comments:

Berlin, Beuys and the Bader-Meinhof: A Beginner's Guide to Modern German Art was the title of the March talk by Curator Sophie Cummings. 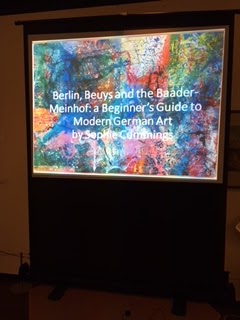 Sophie talked about her appreciation of modern German art, and gave examples of work by Gerhart Richter, Anselm Keifer, Josef Beuys and Sigmar Polke.
Here is Sophie with the new headset type microphone just about visible. 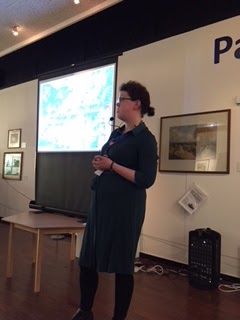 I rather liked this large Gerhart Richter 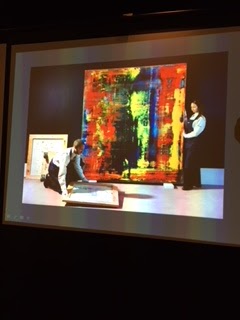 The talk was very well attended, photos of the audience are never easy to capture. 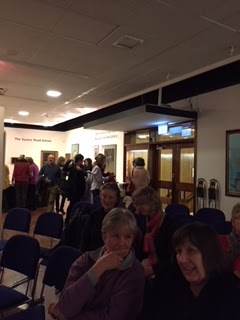 Our next talk is Cellars, Towers and Tunnels by Jon Ratcliffe on Thursday 26 April at 7.30pm, tickets available online www.friendsofsmag.org or from the museum reception during opening hours.

Posted by Friendsof Swindon Museum and Art Gallery at 09:21 No comments:

Character Dolls: Swindon's Past and Present

It's hard to keep up with the new exhibitions at Swindon Museum and Art Gallery this one featuring some of Swindon's characters is brilliant. When I heard the Swindon Stitch n Bitch group were having an exhibition of knitted character dolls, it seemed like an unlikely thing to do. However they are fabulous, if you click on their name above, you'll find a list of the 31 characters depicted in wool, in a Swindon Advertiser article.
Here are some of my favourite characters: 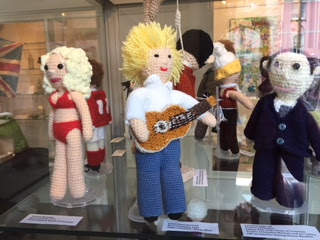 Above from the left Melinda Messenger, Justin Hayward and Lord Joel Joffe. Apparently Rod Hebden contacted Melinda Messenger and asked if she'd like to come and see 'her' doll, and she has done so! 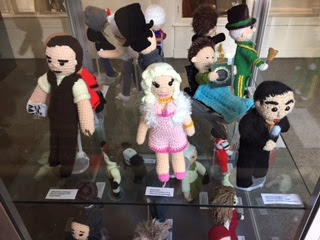 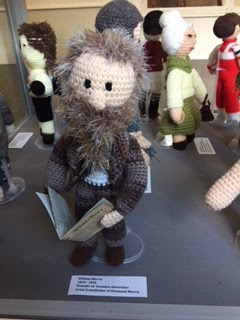 Above William Morris, founder of the Swindon Advertiser and below his grandson, Desmond Morris, among many other things, Patron of the Friends 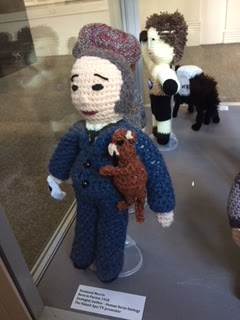 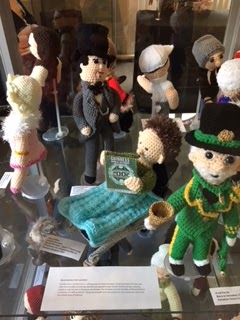 In the photo above, you can see Isambard Brunel, Tony Collins of hospital trolley fame and Fred Ferris, a beautifully turned out Town Crier, and below the case all the figures are displayed in, it's in the downstairs room on the left of the museum as you go in through the front door. 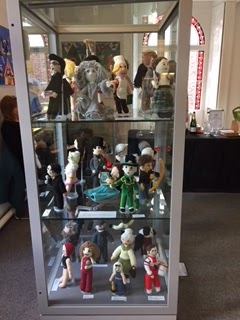 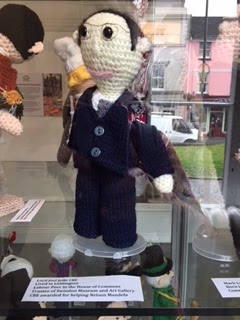 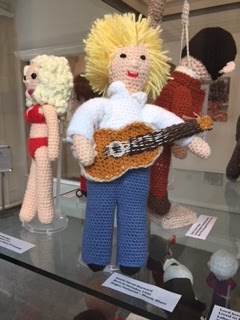 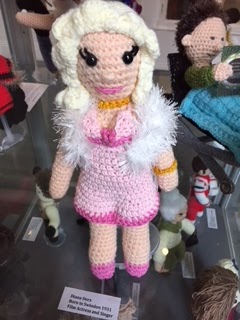 and against the light, a photo of Julian Clary. 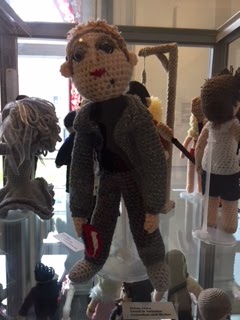 If you love the character dolls, then it's possible to own one. Simply give your name, name of the doll you'd like and how much you're prepared to pay for it to the member of staff on reception at the museum. Alternatively email Tracey Major on majortracey@gmail.com with the information. The doll goes to the highest bidder after 5 May when the exhibition comes down.
All proceeds go to the charity Swindon Mind
Posted by Friendsof Swindon Museum and Art Gallery at 10:06 No comments:

In addition to the three main exhibitions in the main gallery at Swindon Museum and Art Gallery, there's an interesting corner where new acquisitions are displayed until this Saturday 14 April. It's well worth making a trip there before the change over of exhibitions to see them.
If you are able to come along to the museum on Friday 13th April, there will be a FREE lunchtime talk from 12.30-1.00pm given by Curator Sophie Cummings on the new acquisitions. 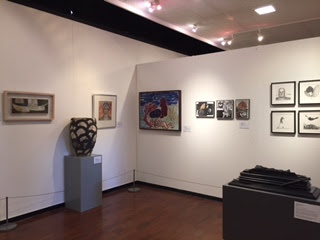 Above that's what they look like in the corner of the gallery, and below working clockwise, the picture below is 'Haunted' by Teresa Lawton, it's oil on canvas, a gift in appreciation of Meryl Ainslie's services to the Arts. 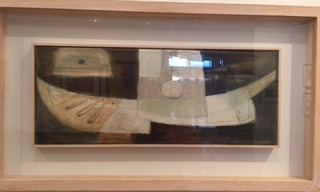 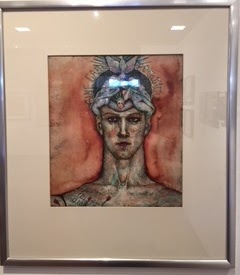 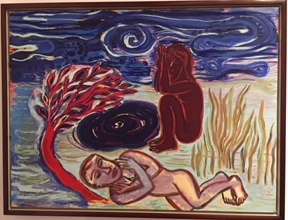 Above 'Play Dead II' by Eileen Cooper OBE RA Purchased in 2017 with the support of the V&A Purchase Fund, The Friends of SM&AG, the family of the artist and Rabley Contemporary.

Above Marvin Gaye Chetwynd, 'Catpeople  #2, #3 and #4 on collaged paper. Presented by the Contemporary Art Society 2018 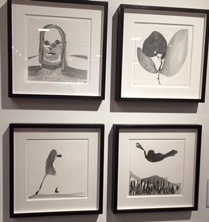 Above another contemporary Art Society presentation above, Nicola Tyson, 'The Gaze', 'Stoned Rose', 'Getting There' and 'Something in the Air'
and lastly 'Being There' by Denise MacPherson seen below, another acquisition gifted in appreciation of Meryl Ainslie's services to the Arts. 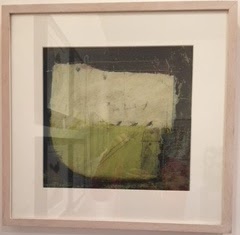 Posted by Friendsof Swindon Museum and Art Gallery at 09:20 No comments: