An essential part of running a museum and art gallery is encouraging new audiences, and the Friends are keen to help the museum achieve this goal. One of the ways this can be done is by holding children's workshops, they are not only very popular but also help familiarise children the gallery. We made a donation, along with the Art Society, to help these run last summer, and were very pleased once again this year to make a donation to help these workshops take place. We also paid for the design and printing of the flyer advertising the workshops, which are really family workshops, since the accompanying adults usually enjoy helping their children.
This is what the flyers look like: 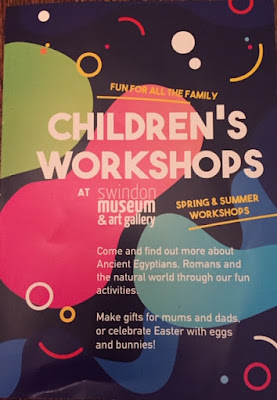 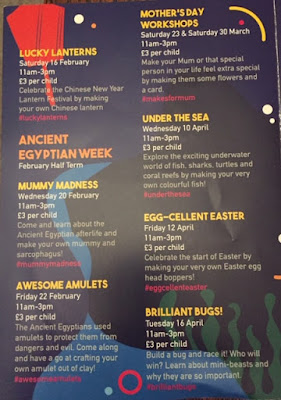 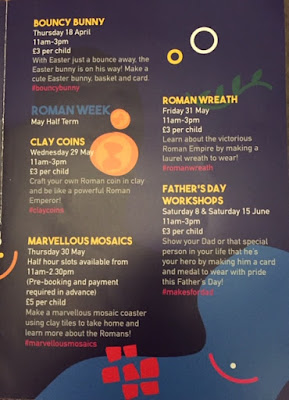 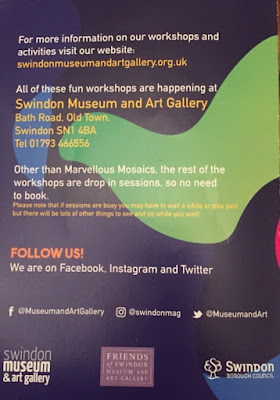 The workshops are illustrated on the museum's website if you click on the link, you can see them in more detail. It's also very rewarding and interesting invigilating at the workshops, many of the Friends help with running the workshops.


Posted by Friendsof Swindon Museum and Art Gallery at 14:50 No comments:

On the 14 March, we read about the latest plans for the Swindon Museum and Art Gallery, in this cabinet paper, on page 35 onwards:
https://ww5.swindon.gov.uk/moderngov/documents/g9398/Public%20reports%20pack%2020th-Mar-2019%2018.00%20Cabinet.pdf?T=10
It's interesting how similar they are to the plans proposed in 1968 which resulted in the building of the Wyvern Group, and discussed in the previous blog post after Michael Gray's talk.
The plans were approved by cabinet a week later and goes before the Scrutiny Committee on 25 March for further consideration.
There was a press conference in the gallery at the museum when Cllr Dale Heenan was given a chance to outline the plans, here he is discussing them 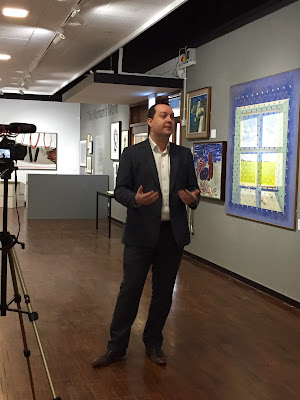 There's a good summary of his ideas/plans on the museum's website and another summary of the plans here:

'As most of you may know, Swindon Borough Council undertook an options appraisal last year to find a new home for the museum and art gallery, but recently it announced that it had not identified an affordable, deliverable option in the immediate term.
In March, the council’s Cabinet agreed:
I  appeared on  Points West the evening of the press conference, here's a photo of me being filmed  talking to Will Glennon about what I think about the proposals. I think the plans are great, but in the interim, it is hard to imagine how cuts can be made the the budget without affecting how the museum operates. 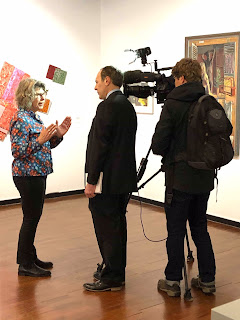 I talked to Tom Seaward, from the Swindon Advertiser about the £20000 cut in the museum's budget this year and how the running costs cannot be considered a subsidy, and the fact that it is hard to imagine how the museum can break even in its present location. Yesterday's piece in the Advertiser is here.
We now have a Plan B and hopefully us oldies will live to see Swindon Museum and Art Gallery being relocated in our lifetime.


Posted by Friendsof Swindon Museum and Art Gallery at 13:54 No comments:

I first met Michael Gray when he came to talk to the Friends about Swindon's Town Hall, designed by Brightwen Binyon, three years ago. The great advantage of having a blog is that even if not much is written about each talk, at least I can say when the talk was held and there are a few photos taken at the time. Here's the link to that talk. I very much enjoyed the way Michael told the tale of the Town Hall, and was keen to know more about the Wyvern Theatre Group, so invited him to come and tell us what's so good about the Wyvern Theatre. I was also pleased that Michael gave me a short biography, and here's what I said about him:
'I am pleased to welcome back tonight’s speaker Michael Gray who is going to talk to us about Casson Conder’s 1971 Wyvern Theatre Project.
Michael is a Conservation Architect with over 30 years of experience in historic buildings involving many different projects ranging from medieval churches and barns to a grand historic hotel in Pall Mall and many more.
He is currently Head of Conservation and Building at Oxford University.
He lives in Swindon, not far from the Museum and Art Gallery in the Prospect Place Conservation Area where he is chairman of the local Conservation Trust.
He is actively involved in promoting Lydiard Park an 18th century country house on the edge of Swindon as a Trustee of the Friends of Lydiard Park.
With the passing of time heritage designations are increasing recognising 20th Century architecture as something worthy of preservation under the 30 year rule. Against this background Michael has prepared this talk to inform and promote the debate about the Wyvern Group which is increasingly neglected.  With two major historic public buildings in Swindon in a state of perilous neglect it is hoped that the talk will promote a wider appreciation of the Wyvern Group so that it does not suffer a similar fate to those Victorian buildings.'
Michael started with the history of architecture, beginning with Corbusier in the 1930s. He had an excellent Power Point presentation to illustrate his talk, I have photographed some of the slides, to show the plans drawn up in 1966 when towns and cities all over the country were encouraged by the Wilson government to foster the arts and were given funding to build the necessary infrastructure to support this. The original plan suggested demolition of the Town Hall and retention of the Tabernacle, in fact as we now know, the Tabernacle was demolished and the Town Hall retained. I have photographed some of the Power Point slides starting with the Civic Centre Master Plan from 1966: 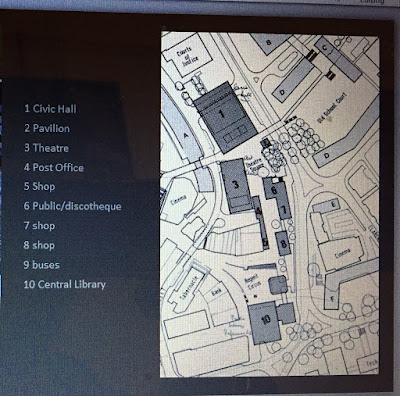 The Civic Hall, at the top of the picture was not built when the Wyvern Theatre was built, it would have provided a larger space that would seat 1000 people, it was going to be built in the second phase of building, but this never happened because of shortage of money. 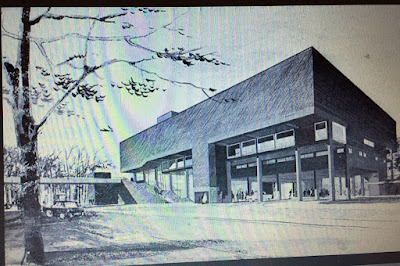 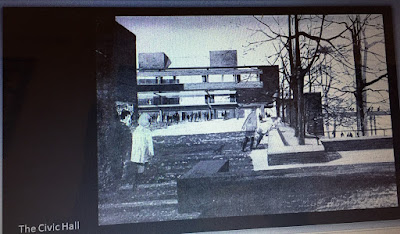 This charming photograph shows the opening in 1971, the Queen has her own umbrella, the Mayor has his umbrella held for him and the Duke of Edinburgh doesn't have an umbrella at all. 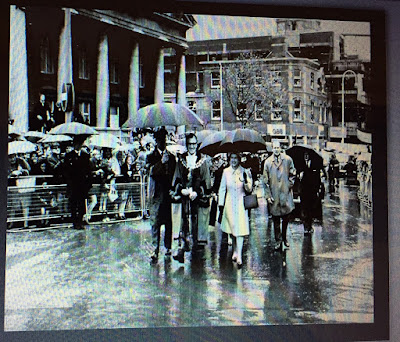 This photograph shows the Wyvern looking rather splendid 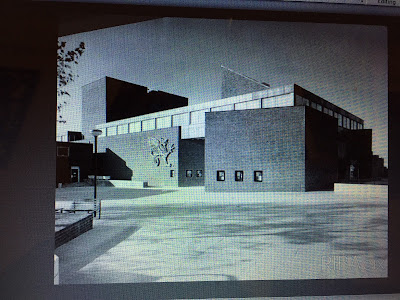 I also took a couple of photos of the audience 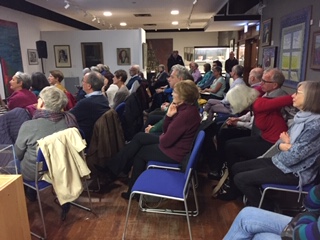 and in this one, Michael can just about be seen 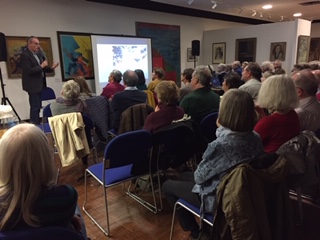 The future of the Wyvern Theatre as we now know from the council's recent announcements, is now uncertain. It was very interesting to find out the history behind the whole area, and why the car park remains a vacant space.

Posted by Friendsof Swindon Museum and Art Gallery at 15:26 No comments: