'Threads in a Web' a talk by Sculptor David Lomax

I first heard about David Lomax's work when I went to the unveiling of Hoarusib, a life sized sculpture of a bull elephant,  at Liddington Manor on 4 December 2016. The elephant had been moved to the coombe beside Liddington Manor 25 years after it had been first commissioned, the whole story is recounted here and on the Liddington village site. I also discovered an article in The Independent. 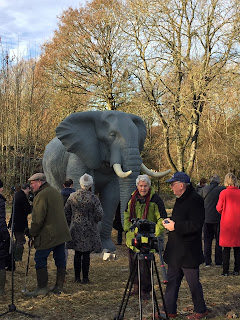 I took a few photos of the unveiling attended by many people.

And then was able to take a few without anyone else around, showing the delightful setting. 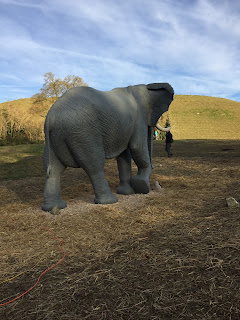 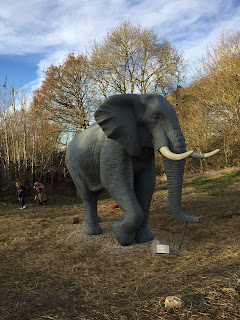 There was also a lovely brass plaque made to commemorate the event, and unveiling by Robert Buckland MP. 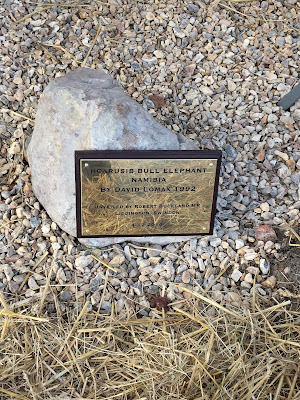 Also in the same setting is this beautiful sculpture by David Lomax: 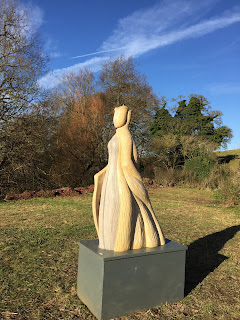 I was intrigued to find out more about David Lomax and the talk did not disappoint, David took us through his major influences and illustrated his talk with a wonderful selection of visual images. I took lots of notes, so I'll see if almost a month after the talk I can make any sense of them.
David grew up near Aldbourne, influenced by the form of trees, Sarsen stones and the landscape created and changing through geological time. The first image he showed us was a view of the earth from the Apollo space mission 50 years ago, he also cited James Lovelock who said it was useful to think of the earth as a living organism, and declared a climate emergency 10 years ago. This article raises concerns about carbon dioxide levels increasing exponentially.
David took us back 40000 years ago looking at cave paintings and early man's relationship to animals, and onto Knossus and the minotaur, a python and lizard and  John Aspinall's silver back gorilla. He commended the green men at Sutton Benger church to us, Henry Moore's sculpture of mother and child in a church in Northampton.
David ended his talk by saying we sacrifice things for our way of life and wondered what the updated Apollo photo would look like now. The oceans would be white with plastic rubbish.
Rereading what David said the talk would be about, he fulfilled the brief he had set very well indeed.

'This illustrated talk explores influences and themes that have prompted David’s sculpture; being more conscious than ever today that the exponential pace of industrialisation has left a splintered web in the continuity between mankind and the rest of creation. The essentially figurative work often combines animal and plant forms in relation to human form in search of connections: acorn in a man’s hand, tulip and bird’s beak and crowning a queen, in a way it’s like darning the odd stitch in that fractured web. David has drawn on paleolithic, pre-classical Greek and African inspiration sensing there is a more visceral engagement with earth, and his own memories of skylarks flitting between sarsen and beech, sentinels of the chalk hills.

The talk will be accompanied with images that have moved David, and with examples of sculpture they have inspired.'
It was an excellent talk to a packed house. I took some very poor photos which I'll add here: 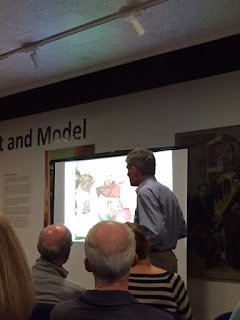 Above David talking about cave paintings, and below another one in action 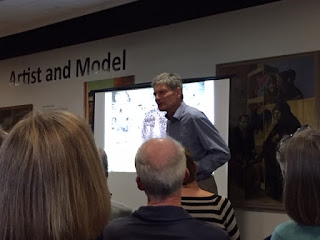 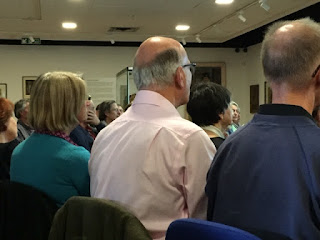 Below is a photo, with a head in the way of one of the most wonderful carvings. My notes are too incomplete to identify it, I'll rectify this soon. I won't recount the anecdote about the dog portrait, but that was a classic. 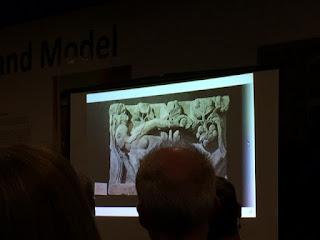 Thank you David for a wonderful talk and I'll be in touch soon.
Posted by Friendsof Swindon Museum and Art Gallery at 12:33 No comments: