Out of the Box a talk by David Bent

Our May talk was by Swindon based David Bent, prompted by the fact that Swindon Museum and Art Gallery were hosting an exhibition of his work.entitled 'Out of the Box'. We had an extremely entertaining evening, no time for snoozing in David's talk, and there was much interest and

laughter. I took copious notes as David took us through his early influences with some great photos, 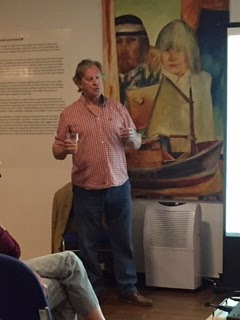 David's Father was, in his words  'an aviation nutcase', he was also a brilliant aeromodeller whose first job was at Croydon airport working for Sir Alan Cobham a pioneering aviator . David & his dad watched the first public flight of the Red Arrows in 1965 together at Biggin Hill.
From an early age, David also loved nature - This waxwing was painted by he when he was aged 6, he's captured the essence of a waxwing hasn't he? 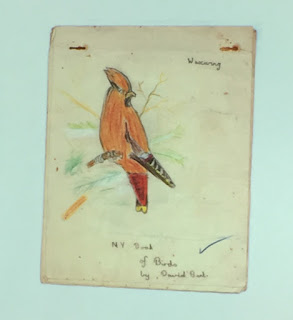 His interest in life drawing also began at an early age 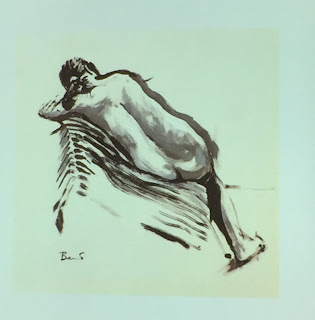 By the age of 13, David was visiting galleries and hooked on art, and after a spell of work experiences , including in a tax office, his mind was made up, he wanted a career in art, and worked in many jobs, including on cross channel ferries to fund his art education . After art college, his began to exhibit his work including as shown in the photo below. 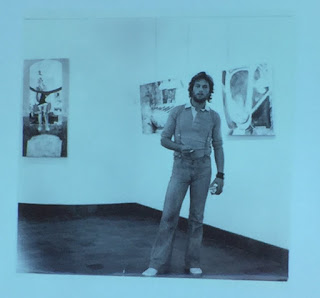 There were audible gasps in the audience when this photo was shown! It was the 1970’s. During this period of time, David undertook a variety of jobs to support his art practice - including in the theatre, gold and silver industry , Cyprus and began work as a youth worker. At this time , he was based at the Harrow Club, in Freston Road - adjacent to Frestonia - where a group of people had declared independence from the government. In the same year David got an Arts Council Grant , his work included painting large scale murals including on skateboarding. In parallel, David started a small computer graphics company called Spectre Graphics. He also traveled extensively , including to India , the Himalayas and Equador Peru and Costa Rica Central America . In 1986 David had an exhibition at Lauderdale House in Highgate. He then moved to a potting shed in the country to peruse his art practice more fully, taking on a number of adult art classes to sustain his work. At this time , David met Carole who became his wife. They  moved to Swindon in 1995 when Carole was headhunted for a senior role at WHSmith Head Office. Since being in Swindon, David has built up his studio practice including creating the Movement 2000 series of paintings which you can't see properly here, but can be seen on his website. 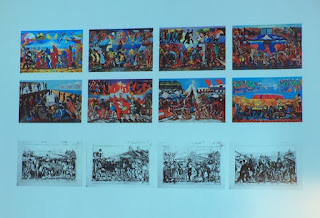 In 2000’s David’s early aviation influence came to the fore , when he pioneered a new approach to modern aviation art. Supporters include the Red Arrows who invited him to collaborate as artist in residence, leading to his series of paintings shown below. 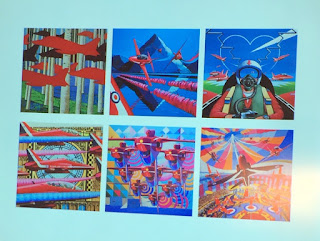 For the past 15 years, many of David's paintings and photocollages have been aviation related, with exhibitions at Russell Cotes, the National Memorial Arboretum, RAF Museum and elsewhere.


At the end of the talk, David was presented with a cake decorated with one of his paintings, here's Carole showing an ‘ aerobot ‘ art work that had been just been given to them by an A level student who had been inspired by David’s work 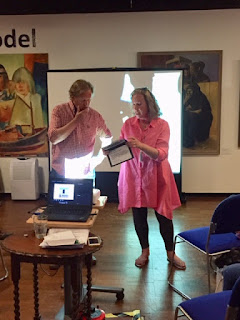 and here's a photo of David, Carole and Sherill Semple, a supporter of David’s work and Ambassador for Flying Scholarships for the Disabled. She had driven from Lincolnshire to come to this Friends Talk and brought this amazing cake with her as a surprise gift ! 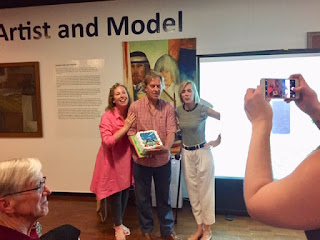 A lovely evening, thank you to all those who came and for such an entertaining and informative event.


Posted by Friendsof Swindon Museum and Art Gallery at 01:04 No comments: