Ken White: An Exhibition of his Talents

Our November talk featured Ken White in conversation with Andy Binks, with the same talk repeated for a second evening in order to be able to accommodate the large number of people who wanted to come. The talks coincided with the end of Ken's exhibition at Swindon Museum and Art Gallery, and were intended to take the previous in conversations Andy had done with Ken on his life history, a stage further, concentrating more on paintings and linocuts in the exhibition. I was present for both evenings, and thoroughly enjoyed both, Andy Binks, is among other things, Chair of the Swindon Society, and has a great gift of being able to put a presentation together, make it interesting and amusing, and encourage the speaker to share information with the audience. Here they are during the talk, although it's a bit dark because the lights were dimmed for the presentation, it shows Andy questioning Ken: 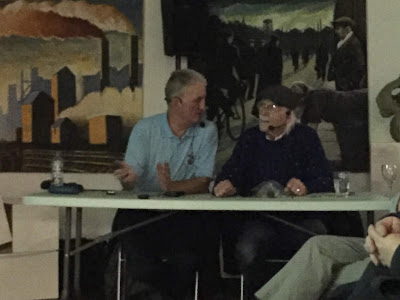 I won't go through much history, but it's worth noting that Kenneth Lindley who wrote and illustrated 'Town,Time and People was one of Ken's teachers at art college.
When I looked him up, I found a great link to Ken's murals for which he was famous between 1976-1985, but I'm jumping ahead, in 1969, artist, illustrator and graphic designer, Alan Aldridge was putting together a book, The Beatles Illustrated Lyrics, published in 1970, he advertised in the Evening Standard for drawings of the group, Ken produced this painting: 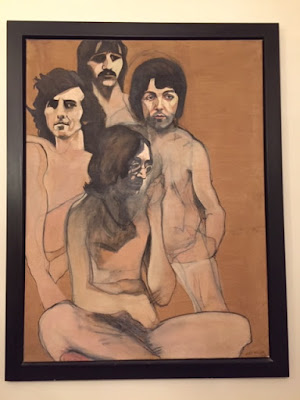 Aldridge paid Ken £20 for the reproduction rights, and offered £100 for the painting, Ken declined to sell it and it hangs in his sitting room today. Andy did ask Ken if he was the only person to paint the Beatles naked, but he declined to answer!
Ken White's association over a twenty year period with Richard Branson took him all over the world, and notably 'The Scarlet Lady', a 'hybrid of ideas' was heat sealed onto the fuselage of  Virgin aircraft. 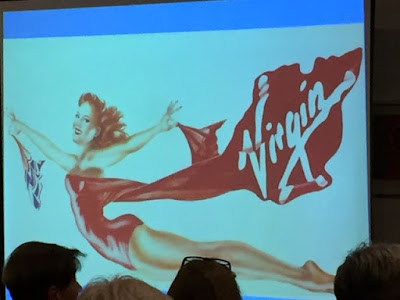 The before and after photos of murals and preparatory drawings are wonderful, it's a shame we can't see most of them any more, there are lots of photos online and in Angela Atkinson's wonderfully illustrated book, Ken White: Muralist and Painter,  I love the imagination and careful execution seen in all of the murals, this one Ken at Highworth swimming pool is wonderful, from this: 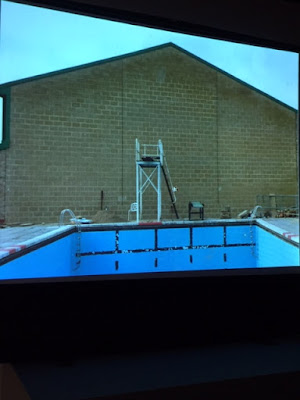 talking to a packed house: 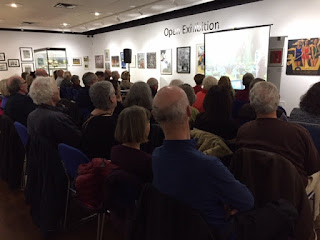 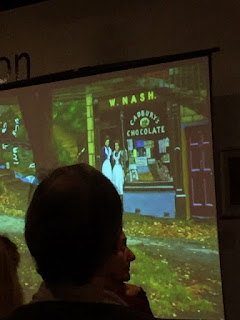 and this one with lots of famous Swindon people of different eras portrayed, even David Murray John minus usual cigarette in the bottom left hand corner: 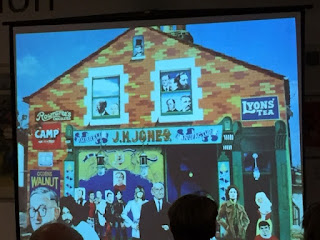 Ken also talked about how he made his lino cuts, and illustrated it with this lino cut of his cats 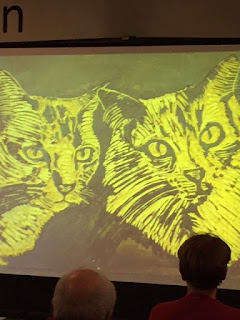 which when printed out and coloured in looks like this: 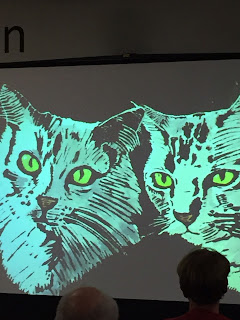 There was another fascinating insight when Ken talked about his inspiration, he discussed photographs taken by Denis Bird, mainly in the 1960s, providing a great inspiration for his paintings. Seen below, Denis Bird's photograph taken beside the railway line 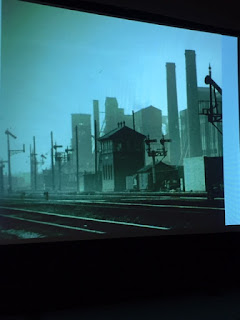 and Ken's painting of the same spot. 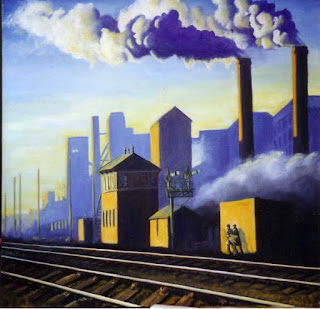 We had a great crowd on both nights 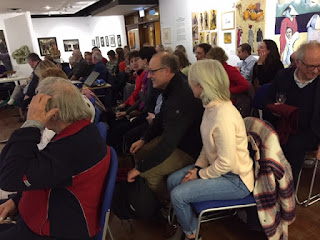 Here's a lovely photo with a great admirer after the Thursday talk:

Posted by Friendsof Swindon Museum and Art Gallery at 14:32