The Roman wine strainer seen below forms part of the archaeology collection held at Swindon Museum and Art Gallery, I had not really considered its provenance and how it came to be in the collection before raising funds for its restoration.Visiting the Wiltshire and Swindon History Centre where it is being restored made me consider how amazing it is that it had been preserved in the ground since the 1st Century AD until it was discovered 16 years ago..
If you click on the Swindon MAG link, it will take you to the archaeology page where you will also be able to go on a virtual tour of the archaeology gallery. 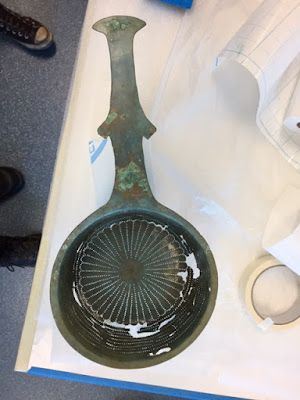 Lots of questions occurred to me about the wine strainer, some of which were answered when I was given access to the documents provided to the museum when it was donated in 2005. It was found by a metal detectorist who was operating on the edge of the site of Durocornovium, a Roman settlement based around the east of Swindon where Dorcan is today built, including Lower Wanborough. It was found along the road from Lotmead farm, and across the road from Wanborough House on Wanborough Road, called Ermin St on the map provided which initially caused a bit of confusion.
'The Romano-British small town, lying on the flat Kimmeridge clay lands between Stratton and Wanborough, on Ermin Street, to the East of Swindon in Northeast Wiltshire, was first recorded in the seventeenth century'
.
The A419, Stratton by pass cut through Durocrnovium, and according to the report:

'Excavations in 1966, conducted for the Ministry of Public Buildings and Works, followed proposals to build a Stratton bypass and the continued south-eastward expansion of Swindon, which included housing estates and a flood lagoon. Excavations continued within the field known as ‘Nine Acres’ until 1970 then again in 1976, these produced structural evidence on either side of Ermin Street, a major Roman road that extends from London (Londinium) to Gloucester (Glevum)'

'Archaeological observation, salvage excavation and artefact retrieval was undertaken by members of the Swindon archaeological Society during road, housing and lagoon construction, revealed numerous burials, cremations, roads, buildings and a ford across the Dorcan.'

There is concern that when the eastern villages are built, they will be building over a lot more Roman remains, and the hope is that some of them will be salvaged.
There was an Adver article on the 19th of July 2005 on page 23 about the wine strainer which I have been unable to locate, but here are some more concerned articles in the Swindon Advertiser about the land where Durocornovium is situated being further developed:
Adver article 2009 concerned about development of land east of Swindon with archaeologist Bryn Walters explaining the threat to the remains.
and The Heritage Journal from 2010 also has a link to another Advertiser article with more quotes form Bryn Walters.
Advertiser article from 2013 this article focuses on information from another local archaeologist, Bernard Phillips.
The author of the report into the wine strainer helped the metal detectorist dig it carefully out of the ground, in answer to the question about how far down in the ground the wine strainer was located and how it was extracted from the ground, the report says:
'Joe and a colleague had excavated a small rectangular pit, revealing at a depth of 0.51cm the bronze vessel lying upside down,'
'The Romano-British small town, lying on the flat Kimmeridge clay lands between Stratton and Wanborough, on Ermin Street, to the East of Swindon in Northeast Wiltshire, was first recorded in the seventeenth century.'
We look forward to welcoming back the Roman Wine Strainer to the archaeology gallery soon.

Posted by Friendsof Swindon Museum and Art Gallery at 11:40 No comments: 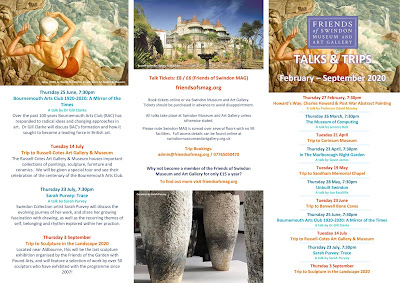 Starting with the complete flyer and then a breakdown of all talks and trips, above the outer part of the flyer, and below the inside. Tickets for talks can be obtained at the museum during opening hours, and also normally from our website. The website is currently unavailable, normal service will be resumed as soon as possible. Booking for trips is by emailing Linda Kasmaty on lindakasmaty@hotmail.com , don't forget Friends get reduced price entry for talks and priority booking on trips. Why not join today if you're not already a member? 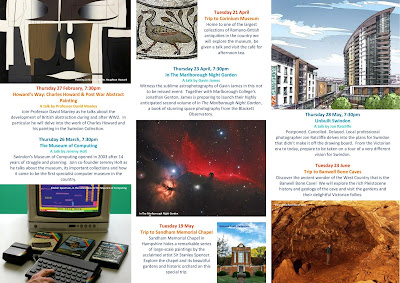 and the front page which summarises the activities:

Our first talk of 2020 takes place on Thursday 27 February, Professor David Manley will be talking about the development of British abstraction during and after World War II 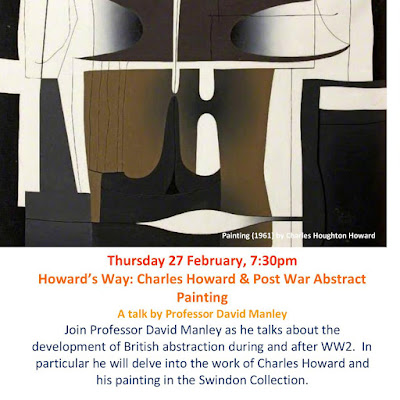 In March our talk will be about the award winning Museum of Computing given by the highly entertaining Jeremy Holt. 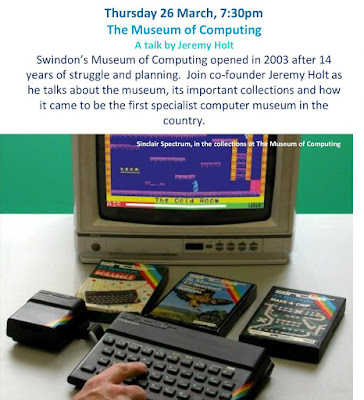 Our first trip of the year is to the Corinium Museum in Cirencester on 21 April, some of you may remember Amanda Hart gave us a very interesting talk about the Museum in October last year, so we thought we'd take a trip out there. We're going independently, there is a good bus service to Cirencester, and meeting there at 2pm. We will have a talk in the lecture theatre and a look round the museum. Cost to be announced soon.

Our April talk is by astrophotographer Gavin James who takes photographs from the Blackett Observatory at Marlborough College. This link to their website gives you up to date information about the night sky. 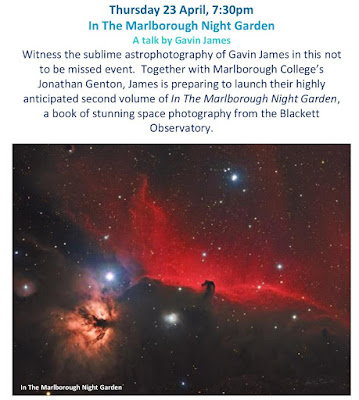 Our second trip of the year to the wonderful Sandham Memorial Chapel. It's owned by the National Trust, so members please remember cards. We'll have a 40 minute talk, a look round the paintings and lunch at The Carpenter's Arms opposite

Our May talk is by the very popular Jon Ratcliffe, he will give us a very different view of Swindon. What might have been....... 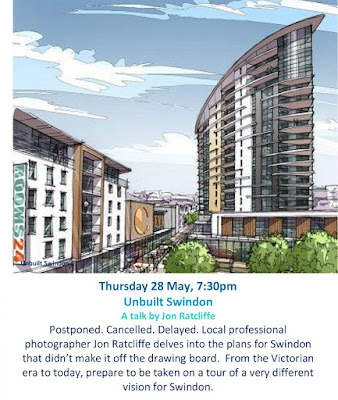 Our third trip is to the fabulous Banwell Bone caves. I must admit to being sceptical about these, but have a look at the website, this looks like a fascinating trip. 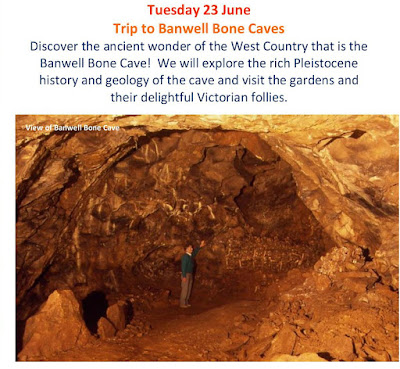 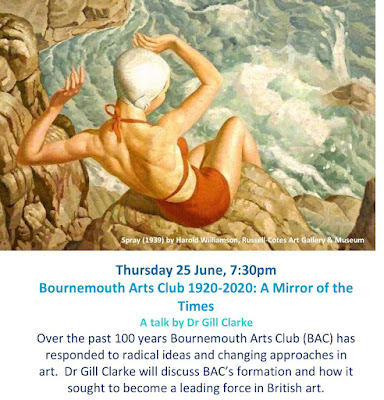 Dr Gill Clarke's talk will be followed by a trip to Russell Cotes Museum in Bournemouth, more details nearer the time. I think we will have to book a coach for this trip as well. 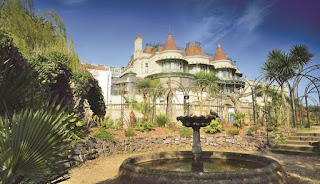 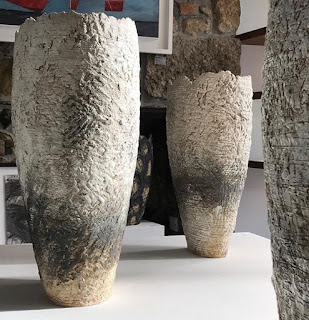 Our final talk before the summer break in August will be a talk by Sarah Purvey ahead of her exhibition in the gallery the following week.
And last but by no means least, our final trip of the year will be to the Sculpture in the Landscape 1969-2020 exhibition in September organised by Friends of the Garden, this will be the seventh and final exhibition organised by this group. Find out more here
There's a fascinating story on the website.

Posted by Friendsof Swindon Museum and Art Gallery at 13:28 No comments:

Last week a small group of  Friends visited the Wiltshire and Swindon History Centre in Chippenham, ideally placed from our point of view about 5 minutes from the railway station. The last time we visited the history centre was for a guided tour of the building, and to briefly glimpse the Highworth Pot from outside the laboratory. I've looked up the post and discovered that we actually visited in February 2012. One of the benefits of writing about every event the Friends engage in is that there's always a record to look up. Here's the link to that trip in 2012.
This time we were going to look at the Roman Wine Strainer, currently being conserved by Beth Baker, Senior Conservator at the History Centre, funded by money raised by an appeal to Friends' membership. We met Beth in the reception, and then were taken up to the laboratory, where there were 3 people working. The other two are working on cleaning up coins. The work requires such intense concentration that they have 45 minute timers reminding them to stop working and stretch their hands. Beth remarked that it's easier to work on the strainer in the morning because of the intense concentration and care required when handling the wine strainer.
Beth, seen below, explained the process she's using to stabilise and try and strengthen the wine strainer which is made of very thin copper alloy. 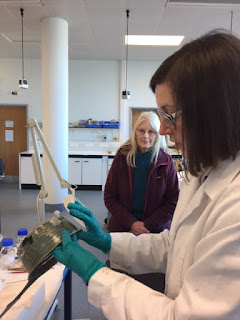 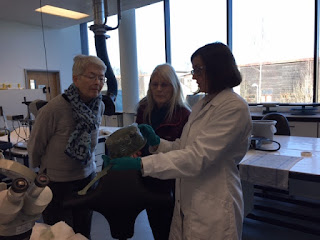 and here she's showing us a stand that has been specially made for the wine strainer. When in the stand, a lot of pressure is taken off it, and people will be able to see it very clearly 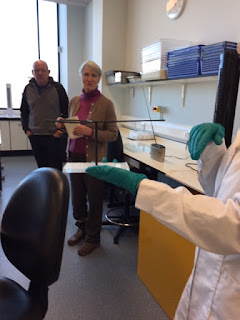 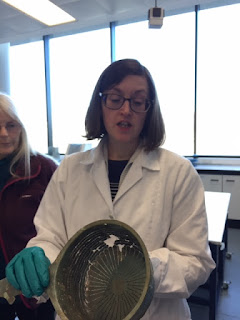 Here Beth is putting the strainer into the stand to show us how it works, it seemed like a tight fit, and I was worried that it might get crushed when being put in or taken out. 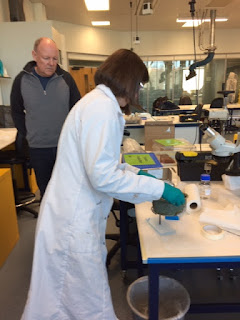 making further adjustments to the stand 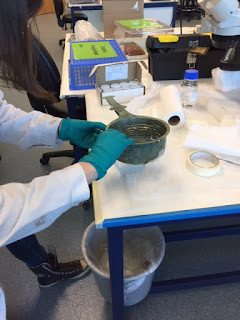 and here's a close up of it 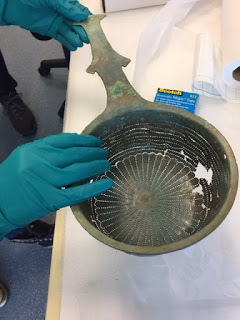 and this photo below shows how good it looks when fitted into the stand. The delicate pattern of holes is beautiful. 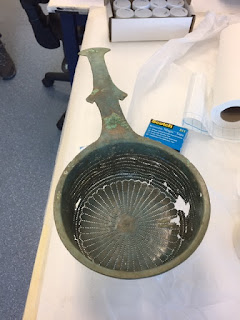 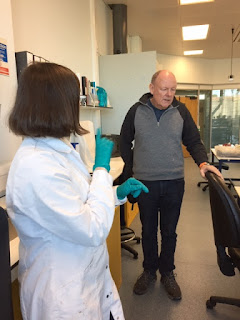 Mike McQueen above came to meet us; he was working in another lab 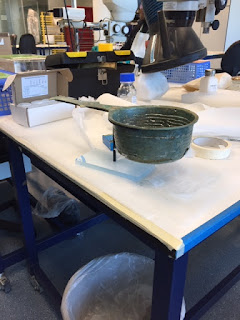 Kathy having a good look 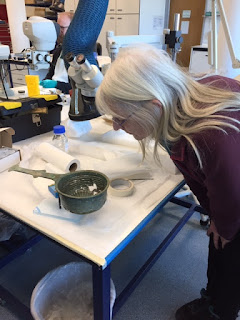 and a final photo 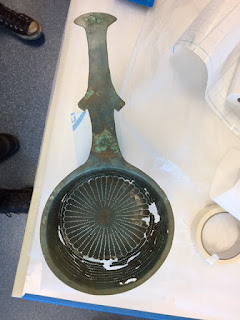 Why was wine strained? Apparently herbs were added during the process, and had to be removed, and if the wine was made from fruit, presumably that had to be strained. I wondered where the wine strainer was found, and how on earth is was so relatively well preserved. Beth didn't know of the provenance of the strainer, but there was a suggestion that it came from the old Purton Hospital site. Thamesdown Archaeological Unit undertook an excavation there ahead of the development of the site with new housing.  They found a small high status Roman cemetery.  The wine strainer was placed with one of the burials.  Another grave contained a stone sarcophagus in which there was a lead liner .
A few years ago Foundation Archaeology undertook an excavation on another part of the site.  They did not find any sign of further burials which suggests the cemetery was probably a small family graveyard.  The did find evidence of a post framed Roman building and finds of decorated wall plaster and a possible under floor heating system suggested this was also high status.
A reader of the blog has refuted the theory that the wine strainer was found in Purton and says this:
'The wine strainer came from the outskirts of the Roman Town at Lower Wanborough. It was found by a metal detectorist, he contacted me upon its discovery and I went out and helped him remove it from the ground. He subsequently donated it to the museum.'
That sounds quite a definite account doesn't it?
There's a really good blog on the History Centre's website with a piece on another Roman wine strainer, worth looking at that. All being well, we'll get our wine strainer back in the Museum in a few weeks time.
Posted by Friendsof Swindon Museum and Art Gallery at 14:32 3 comments: