THE Museum of Computing a talk by Jeremy Holt

In the halcyon days at the turn of 2020, we brought out an ambitious and exciting programme of talks and trips for the first half of the year, and held our first talk by Professor David Manley who gave an excellent insight into the artist Charles Houghton Howard and his contemporaries in February. We are all by now familiar with what happened next, Covid-19 and the subsequent lockdown and social distancing measures have meant that everything has been cancelled for the forseeable future.
Undeterred, Katie Ackrill and Mags Parker, Art on Tour Engagement officers have started up a fantastic online facility, including 8 podcasts, with another being released this morning as part of the Swindon Spring Festival.
When it became obvious that we are now in this situation for a long time, we talked about how we could continue to provide something for the Friends' membership, and decided to go ahead if possible with our talks' programme using an online facility. Jeremy Holt was kind enough to be the first speaker to give his talk via Zoom, we were all very nervous about how it would go, but I'm pleased to say it went really well, and we are hoping to hold more virtual talks in the coming months. I think we realised that we not only miss the talks, but it's so good to see people's faces which we were able to do when the talk took place. We had 43 people taking part, and since some of those were couples sitting at a computer, I think we can estimate there were 50 participants which is fantastic.
I was not able to download the photos from the PowerPoint presentation, so am using the screenshots which aren't of the best quality, but give you an idea of the slides. 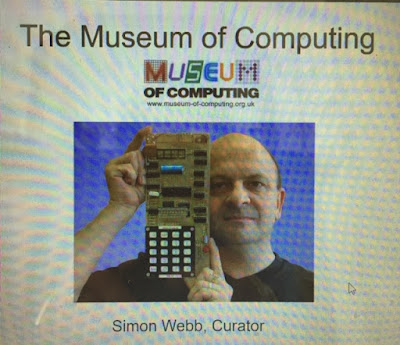 Jeremy Holt and Simon Webb had the idea in the 1990s to open a computer museum in Swindon, and worked towards realising this idea, firstly by looking for premises. When the University of Bath in Swindon opened in Walcot, they were offered some space in there, and opened up in 2003, approaching Bletchley Park for help in supplying exhibits. They had a mock up Enigma machine and a Bond decoder.
Jeremy then talked a bit about what you need for a museum which although it seems obvious, I'm going to list here because I thought it was very useful. Firstly exhibits the public can come and see, secondly the exhibits need conserving, for example plastic leads mustn't touch the computer, there also needs to be education; the computer museum provided coding classes for children, with 40 volunteers leading these. Jeremy also mentioned that you need to change half of exhibitions every 6 months to encourage people to make return visits. 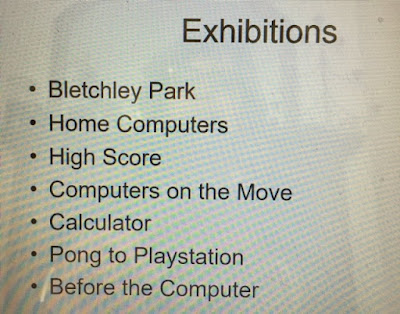 Above is a slide giving examples of their exhibitions.
After the University in Walcot moved on, they needed to find new premises, somewhere easily accessible and visible to the general public. They were able to move to their present premises in Theatre Square, and had a grand opening attended by many important people, including the mayor in 2009. 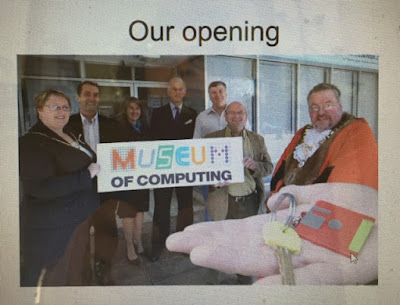 There must be an Advertiser article, but I can't find it at the moment. 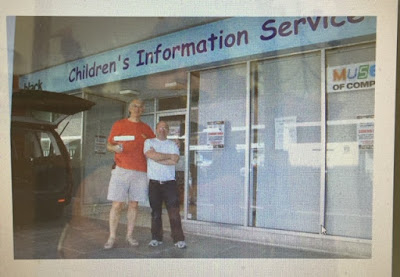 I love this photo taken around the time they acquired the new premises and were moving in there, it shows Jeremy Holt on the left, and curator Simon Webb on the right. 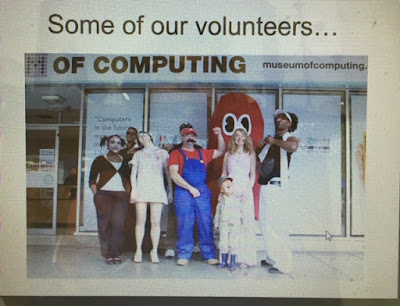 And above some of their volunteers.
Many of you may have seen the Sinclair C5 outside the museum when it's open, and here are photos of Sir Clive Sinclair when he visited the museum: 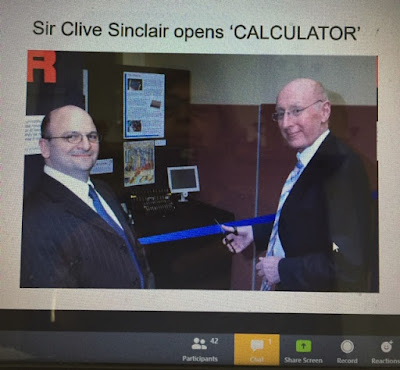 You can also see there were 42 participants when this slide was shown, the Duke of Kent also visited: 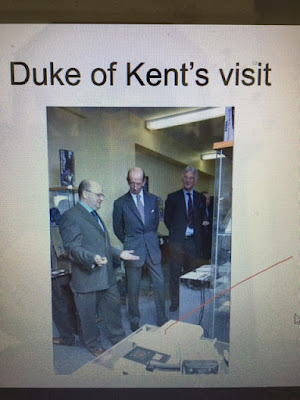 and by this time in the talk, there were 43 participants 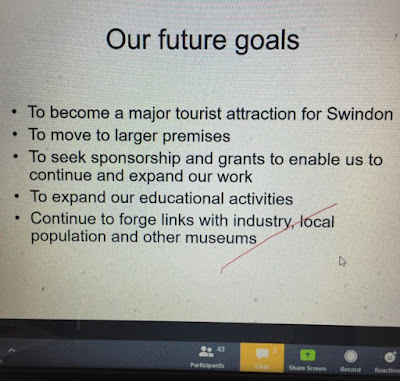 I thought it was very interesting to see the future goals, what a great idea to have such ambitious goals, and I certainly would like to organise a Friends' visit to the Computing Museum next year 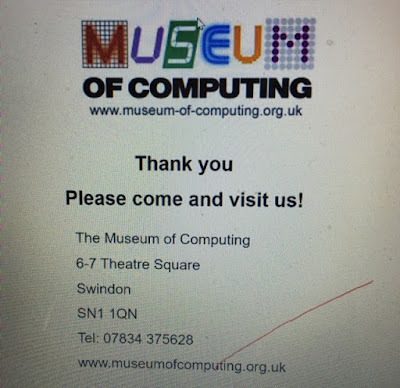 and thank you once again to Jeremy Holt and his wife Antonia, who gave some vital technical back up before and during the talk; for giving us our first virtual talk via Zoom. I hope we will have more before long, I will let Friends of Swindon Museum and Art Gallery know via email when these will take place.
I also found a few more links to the Museum of Computing by searching online
It also appears in the 15 Best things to do in Swindon
and has a Wikpedia page

Posted by Friendsof Swindon Museum and Art Gallery at 03:51 No comments:

At the start of the podcast, Katie reminds us about the 2 war related paintings she has already discussed, the Jankel Adler and Barry's 'War Time Nocturne'.
And then in this podcast, she goes on to discuss the scene depicted by Augustus John in his drawing entitled 'Canadian Soldiers': 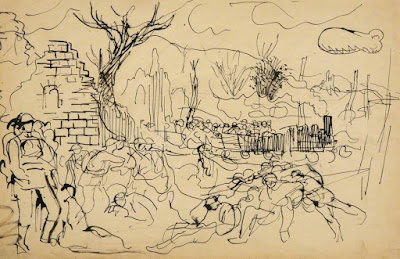 and then Lesley Cole's depiction of 'Mary, Young girl with Doll'. Cole was Swindon's only war artist, and we're very pleased to celebrate his work, particularly this haunting image painted in 1946: 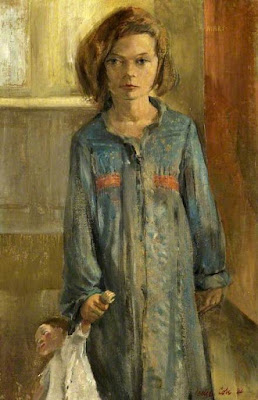 finally Katie talks about 'Road Kill' produced by Prudence Malty in 2013. This picture formed part of the Cicatrix exhibition in the Gallery. 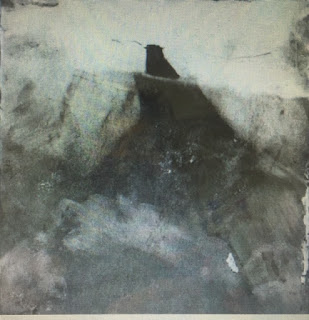 To hear the podcast, please click on this link: Podcast 8
Katie also let us know that her next podcast will be a longer one, released to coincide with when she would have been giving a talk at the Swindon Spring Festival which would have been taking place from Monday. Due to Covid-19, it is now a virtual spring festival.
Posted by Friendsof Swindon Museum and Art Gallery at 09:00 No comments:

Six staff from Swindon Museum and Art Gallery were asked via email to name their favourite painting and give a reason why they had chosen it. This provides a fascinating podcast, to go straight to it, please click on the link below, otherwise have a look at the three out of six images I was able to find on the ArtUK website. If you click on the link, you will be able to find some of the works in the Swindon Collection and three stories below that, including on by Katie Ackrill who has chosen '5 Uplifting Paintings' to discuss.
Now onto the 6 choices made by members of staff:
Firstly 'Cat People Collage' by Monster Chetwynd in 2017, donated by CAS, this work is by a Turner shortlisted artist.
Secondly Maggi Hambling's 'Descent of the Bull's Head 1995, a very well known image: 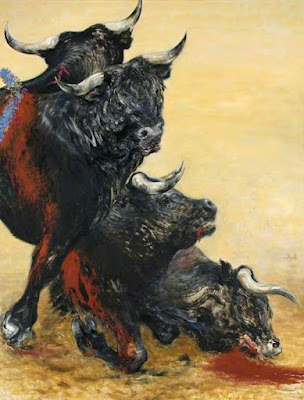 Next 'The Yellow Door' painted in 1967 by George Reason who chosen by Nicki who remembers walking past the house on High Street as a child: 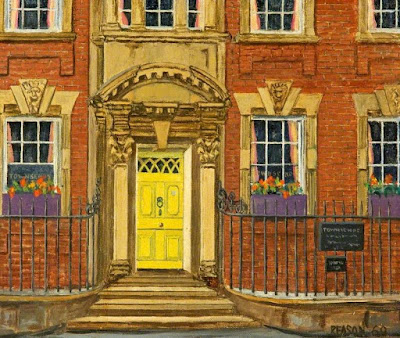 The next painting 'The Teasel Plant, 21, Warwick Crescent' painted by David Tindle is a great favourite of mine, but what Katie reveals about the painting is fascinating. I'd never seen it like that before. My eyes have been opened!! 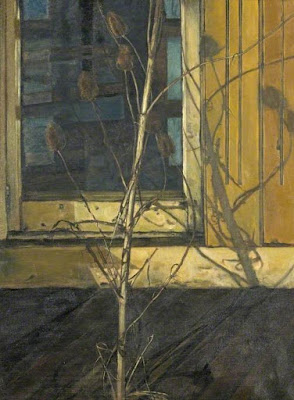 The next two picks are not available on the website, or anywhere as far as I can see, they are a drawing by Robert Bevan of a London church around 1922-23, the description Olivia gave is quoted by Katie, and opens up a drawing.
Finally Collette chose 'Cricklade Landscape' by Edward J Buttar as her favourite painting. Do now listen to the podcast for an uplifting experience of these works:
Podcast 7
Posted by Friendsof Swindon Museum and Art Gallery at 02:32 No comments: