We were very fortunate last week to have a talk given by our Patron, Dr Desmond Morris, who was present at the Launch of the Friends of 6 July 1993. I have been very keen to invite him to talk to us for some time, but when he was living in Oxford, it seemed a long way to ask him to travel; he's now living in Ireland, but we are now able to invite people into our living rooms via Zoom, so distance is no problem.

Desmond ranged from the beginnings of the Morris's involvement in Swindon and then he reminisced about his time in Swindon from 1933-51 with some wonderful tales which are mostly captured on video here:

However due to relief that I'd let the record 84 Zoom participants into the talk, I didn't manage to record the first part of the talk where Desmond traced the ancestral route to Swindon as follows:

After being injured in the Napoleonic war, James Morris, originally from the Welsh borders, didn’t make it home, but stopped off in Swindon where he remained and opened a bookshop in Wood Street. His son, William Morris, Desmond’s great grandfather thought it was unfair that ordinary people didn’t have access to newspapers because they were so expensive, he used to go to London, bring back old newspapers and rent them out to people. At that time, there was stamp duty on news items, whereas fiction, like Charles Dickens publications didn’t attract it. William discovered that if news publications were produced monthly, there was no stamp duty on them. On 6 February 1854, William Morris produced the first monthly newspaper in the country for 1d. Desmond held up a copy of the paper, the front page of which advertised Morse’s Herbal Ointment which cured many maladies. This was produced by Levi Lapper Morse, you can still buy the jars the ointment was sold in today online.

The newspapers were originally sold from the bookshop before moving to larger premises at 100 Victoria Road, where they remained until the offices closed recently and the Swindon Advertiser newspaper production was moved to Richmond House, Hindle Way, SN3 3RB.

The talk was fascinating in many respects, the funniest part was when Desmond Morris described  going out with Diana Dors and trying to remove the copious amounts of lipstick which ended up smeared over his face. We have 3 of Desmond's surrealist paintings in the Swindon Collection of 20th Century art, 'Girl Selling Flowers' seen below was painted when Desmond was 18, and depicts Diana Dors and those amazing lips, peroxide blond hair and huge eyebrows: 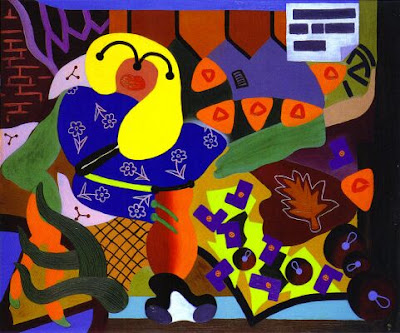 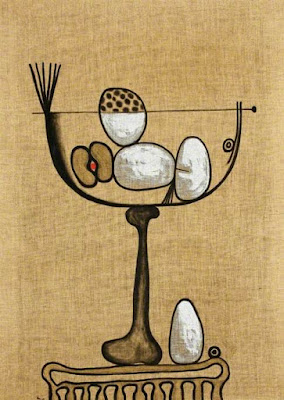 This painting, 'The Incident' was a Christmas present to the Friends the Christmas before last in 2019 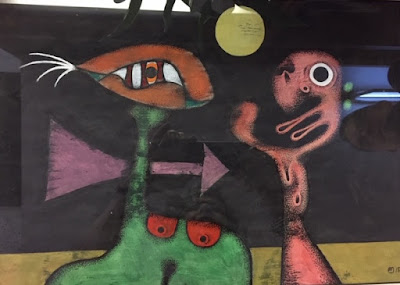 It was certainly an evening to remember, and judging by the number of emails thanking Desmond for the talk, I think many others felt the same.

Posted by Friendsof Swindon Museum and Art Gallery at 10:04 No comments:

It's easy to miss what's going on at the moment, so here's a reminder about our two February talks. The first one is next Wednesday 17 February at 7.30pm when we are very pleased to say that our Friend's Patron, Dr Desmond Morris will talk about various things, including:

My family history in Swindon, the start of the local newspaper and the Swindon Museum. 1930s - my early childhood in Swindon (1933-39) the Swindon cinemas

My discovery of surrealism in 1944

First solo exhibition in Swindon in 1948

After Swindon- The Naked Ape and body language

A reminder of the paintings we have of his in the Swindon Collection: 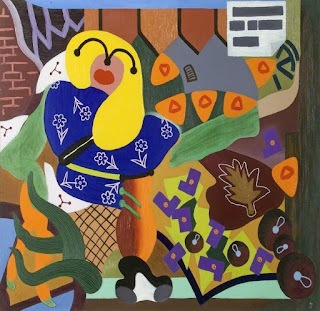 This 'Girl Selling Flowers' painted when Desmond was 18 and going out with Diana Dors.The painting below is called 'The Mysterious Gift' 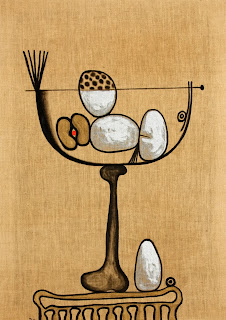 This promises to be a very special evening, a Zoom link will be sent beforehand to all members of the Friends.

Our second talk, a week later, on 24 February at 7.30pm, is by Dr Stuart Prior of Bristol University, well known as Co-Director of the Berkeley Castle excavations from 2004-2019. 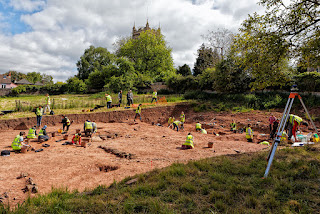 This Zoom Talk will investigate the 15-year-long University of Bristol excavations and landscape research at the Berkeley Castle estate in south Gloucestershire. The excavation project aimed to build up a detailed picture of the history and archaeology of the castle and the associated settlement of Berkeley. The focus for the project can best be described as ‘Minster, Manor and Town’. By combining the results of detailed archaeological fieldwork with information contained in the castle’s impressive collection of 20,000 historical documents, the project adds to the knowledge and understanding of the early medieval period and the subsequent changes in landscape and society that occurred with the coming of the Normans and the erection of a castle on the former minster site. Dr Stuart Prior will cover many aspects from the excavations around Berkeley Castle and town and will also include a look at the trenches excavated in the Jenner museum garden as well as aspects of Community Archaeology undertaken with the Berkeley residents.

Posted by Friendsof Swindon Museum and Art Gallery at 10:15 No comments:

There are still lots of people who don't know Swindon Museum and Art Gallery exists, and if they do are unsure where it is located. During the Covid pandemic, it has been difficult to advertise somewhere, like many other venues, which cannot be open at the moment due to lockdown. The Friends have been looking for ways to publicise this fabulous place to a wider audience, and one of our newer committee members, Angela Atkinson, kindly agreed to put an entry onto the great We Are Swindon site, so here we are, please take a look, I think it's an excellent piece:

For a flavour of the art in our Collection of 20th Century art, please take a look at Art On Tour led by Katie Ackrill and Mags Parker, this aims to share the collections wile the venue is closed. 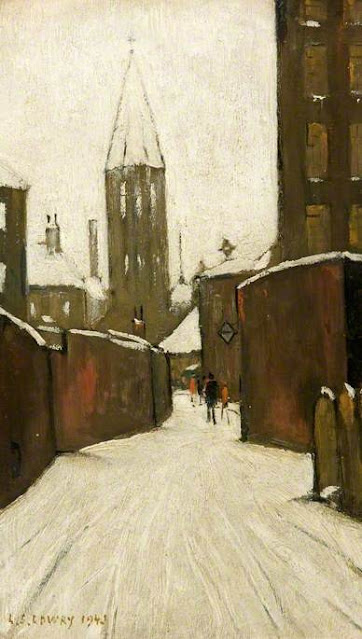 I've included 'Winter in Pendlebury' by LS Lowry, it seemed apt in the freezing cold weather, although we haven't got the snow.

Posted by Friendsof Swindon Museum and Art Gallery at 04:15 No comments:

Email ThisBlogThis!Share to TwitterShare to FacebookShare to Pinterest
Labels: Angela Atkinson, Art on Tour, We Are Swindon

We were very fortunate to have Dr Gill Clarke for our January talk on Evelyn Dunbar. The talk was entitled War and Country and it wouldn't surprise anyone who attended the talk to know that Gill has written a book entitled just that, and is an absolute expert on Evelyn Dunbar. I've just looked up 'War and Country' by Gill Clarke on Abe books and found even second hand copies are fetching £45!

I love Evelyn Dunbar's work, thoroughly enjoyed the 'Lost Works' exhibition at Pallant House Gallery, and bought the book, so I was really looking forward to this lavishly illustrated virtual talk on 13 January. Gill met almost everyone associated with Evelyn Dunbar in researching her, and visited all the places where she'd lived, stayed or worked, apart from Evelyn herself who sadly died in 1960 aged just 54. Gill also visited the Imperial War Museum where there's a collection of Evelyn Dunbar's letters.

Evelyn Dunbar went to Rochester Grammar School which was a progressive school where I think members of the Royal Drawing Society came and taught the students and she learned to 'see, remember, reproduce' and trust your eyes. She was the youngest of five children who were keen gardeners; from school she went to the school of art at Rochester and then got a scholarship to the Royal College of Art. At the time she went, William Rothenstein was the principal when she went, he employed practicing artists to lecture to the students. Evelyn Dunbar was romantically linked with Charles Mahoney, her tutor, and in 1931 won a prize awarded by the Times newspaper.

She is well known for the Brockley Murals which she worked on from 1933-36. They were based on fables and were the most important creations of the age. There's a great blog post here about the making of the murals. They can still be seen at Prendergast School. 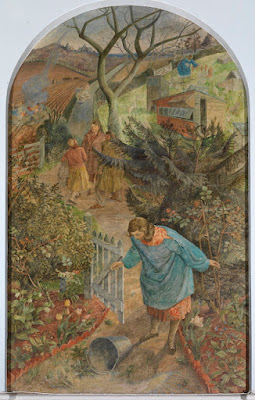 Above one of the panels in the mural, the fable referred to is don't cry over spilt milk, and below, The Cock and the Jewel is one of Aesop's fables. 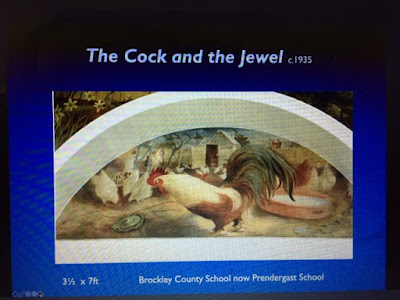 I've taken that photo from the computer, hence the strange effect. Gill also showed us illustrated letters Evelyn had written to people: 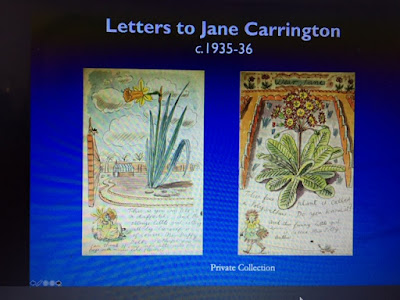 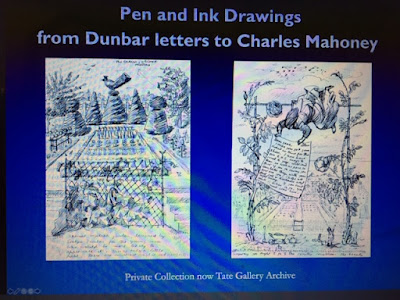 In the late 1930s, Evelyn and Charles went their separate ways, Evelyn produced quite a few garden paintings, and exhibited with Edward Bawden. In 1939, she joined the Womens' Land Army and worked at Sparsholt Farm. Evelyn Dunbar was the only female second world war artist. 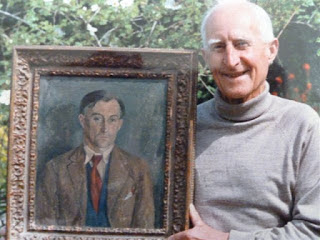 Here is Roger Foley photographed with a portrait Evelyn made of him.

They moved to Wye in 1953 where Roger was a taught at Wye College. Sadly with Evelyn's premature death, they only had 8 years of married life. I'm now going to include some of my favourite paintings, from the Womens' Land Army days and gardens she loved. This one below is 'Womens' Land Army Hostel' c1943, it can be seen at Russell-Cotes Museum in Bournemouth. 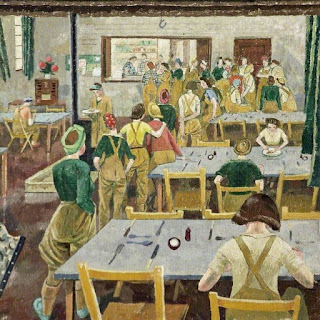 This is 'The Fish Shop' 1943 with Roger Folley making an appearance on the bicycle!

This looks like back breaking work, it's entitled 'Sprout Picking in Monmouthshire' 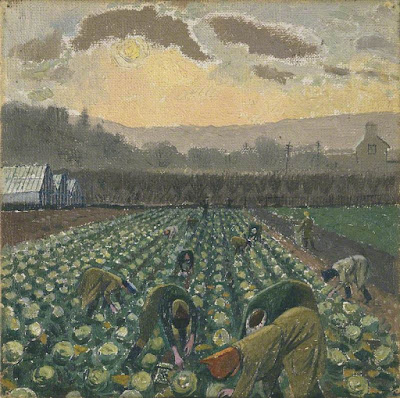 Below 'Milking Practice with Artificial Udders' 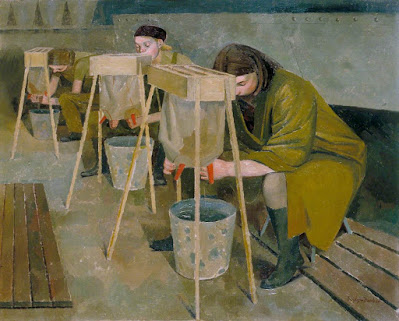 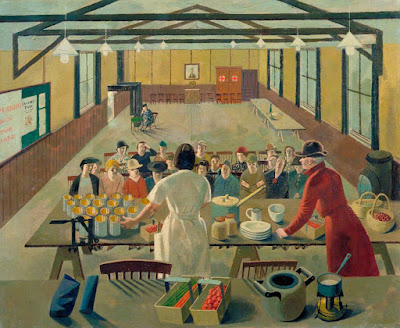 The painting below is called 'Women's Knitting Party' 1940 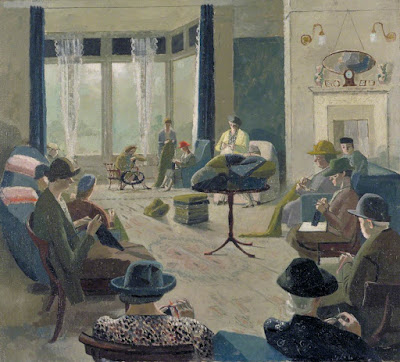 I love this one 'Land Army Girls Going to Bed' 1943, it reminds me of the Ravilious' 'Attic Bedroom' painting 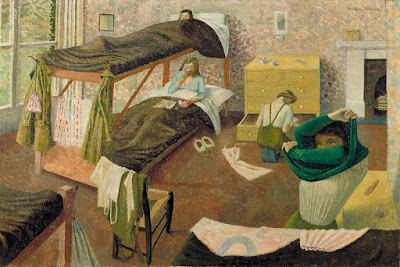 This painting is titled 'The garden' and is a good example of Evelyn's depiction of a personal space around a house. 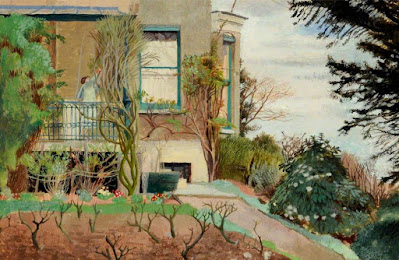 Not so easy to see here, but 'Winter Garden' is a wonderful depiction of her garden with her house just visible to the right of the painting.

You can find many more examples of Evelyn Dunbar's work, the Art UK website has many of those featured here and more:

We were going to visit the Bournemouth Arts Club celebratory 100 years of existence in July 2020 at Russell-Cotes, this exhibition 'A Mirror of Our Times: 100 years of British Art' . This exhibition, curated by Dr Gill Clarke and including some 9 works loaned from the Swindon Collection has been postponed until the 14 July-11 October. More details here.

I do hope we can visit this year, and thank you Gill for giving us such a fabulous insight into Evelyn Dunbar.

Posted by Friendsof Swindon Museum and Art Gallery at 10:13 No comments: