In 2013 Simon Carter collaborated with artist Robert Priseman to co-found the artist led group Contemporary British Painting; a group who donated paintings to the Swindon Collection several years ago, including two of Simon Carter's paintings. Simon recently was interviewed by Katie Ackrill in her 'Meet the Artist series, you can see it here. Apologies I didn't manage to press the record button for Simon's talk. I took some quotes from Simon's web pages:

'My work is based on the stretch of Essex coast where I live and have my studio. This coast is where the gardened landscape of East Anglia starts to fall, literally, into the spare and elemental spaces of the North Sea; where any idea of landscape as static and timeless is replaced by a sense of dynamic flux.     I use the elements of the coast, the creeks and estuaries, saltings and seawalls, as an archive of shapes and colours, of weather and of objects, trying to find a dynamism and passion in the paint that will match those in the landscape whilst retaining a structural clarity that allows observed fact to become something pictured and true.'

Simon talked about the nearby coast to Frinton 0n Sea where he lives including Landermere Quay, Beaumont Cut and Walton on the Naze, all exotic sounding places to someone like me living in Swindon, about as far from the sea in England as one could be, and longing to visit the water's edge. He showed us his painting process through a series of slides. I took photos of the screen and so can share them here:

Above on the left is Constable's painting of Flatford Mill which can be seen at Christchurch Mansion and on the right, Simon's painting of the same view.

A view of a house on Landemere Quay, and I think below a photograph showing where the house is situated 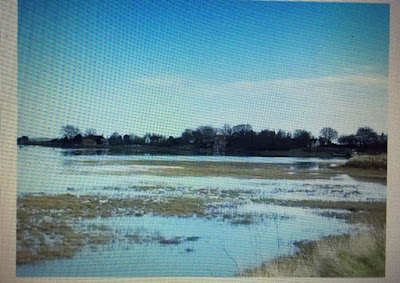 Another view where as you can see the horizon dominates. 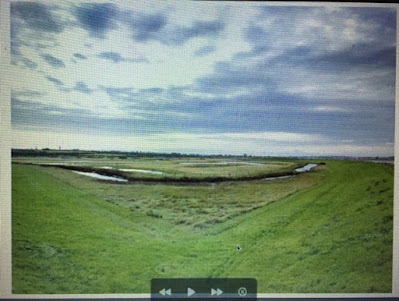 A particular favourite painting is Landscape with Ruined Castle and Church by Jacob van Ruisdale in 1665: 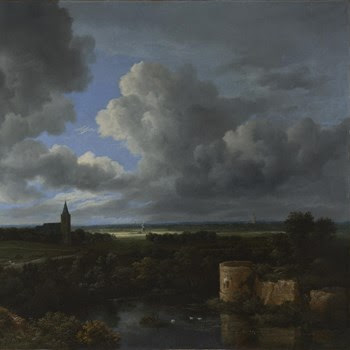 Simon's method of working is to make sketches of a scene, and then work them up into paintings: 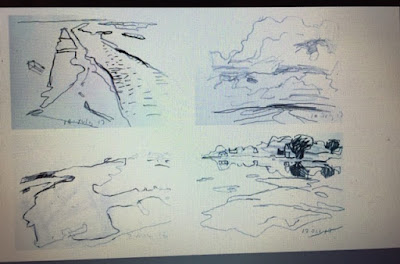 Below is an example of a painting on two canvasses 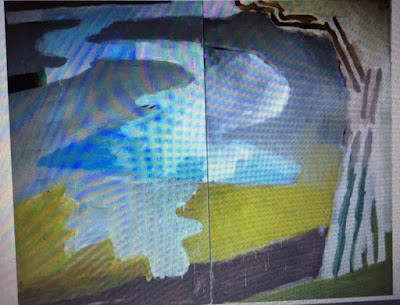 The view below has inspired the paintings below it 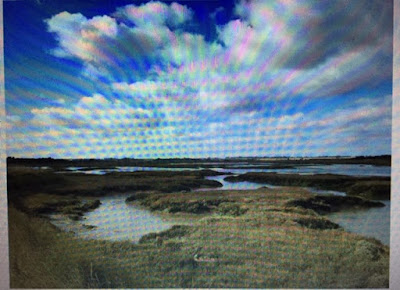 Simon gave us a view of his studio 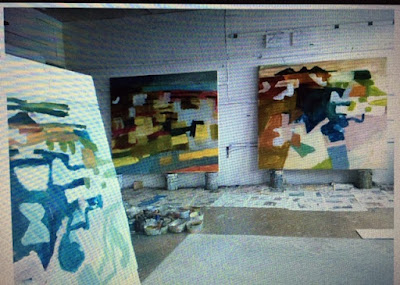 and a view into the distance 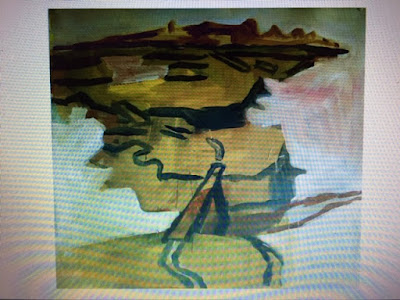 and then finally a photo of his exhibition at Messum's in Wiltshire in 2018: 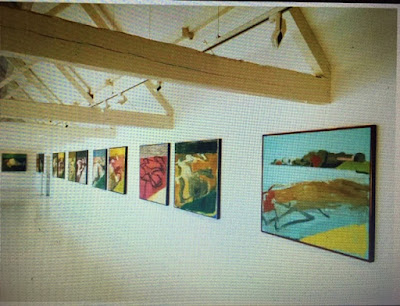 There was more information on a web page about Simon:

Simon Carter was born in Essex in 1961. He studied at Colchester Institute (1980–81) and then North East London Polytechnic (1981–84). Recent exhibitions include Made in Britain at the National Gallery of Poland, Gdansk and Contemporary British Painting at Yantai Art Museum, China both in March 2019. The RWS Contemporary Watercolour Exhibition, London, 2019. Solo Exhibitions at Messum’s, London and Messum’s, Wiltshire in 2018 and The Minories, Colchester in 2017. In 2016 a solo exhibition at SEA Foundation, Tilburg, Netherlands.

Posted by Friendsof Swindon Museum and Art Gallery at 12:54 No comments:

I have sent a copy of the Cultural Quarter investment Prospectus to all members of the Friends, it gives more details of the specifics of the project.

Further details about the proposed Cultural Quarter projects are below including images of what some of the new buildings could look like. 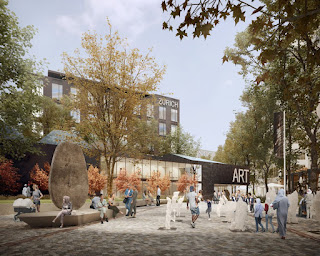 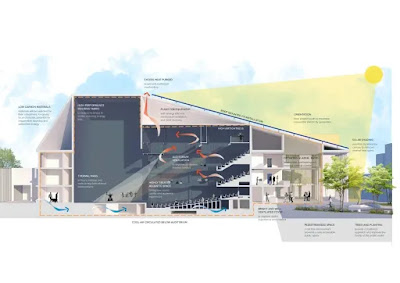 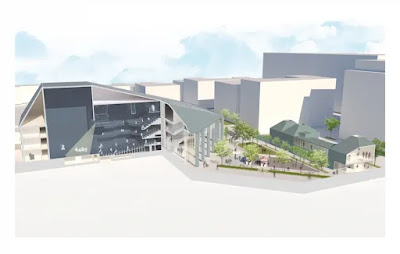 Posted by Friendsof Swindon Museum and Art Gallery at 05:44 No comments:

For our second talk in February, we were lucky enough to welcome Dr Stuart Prior who talked about excavations at and around Berkeley Castle where he was Co-Director over a 14 year period. The background to the project, up until the current day when they are launching a new community collaborative project at Lower Hazel can be found here.

I looked up the village of Berkeley on Wikipedia and it gave me the following information:

'Berkeley is a small town and parish in Gloucestershire, England. It lies in the Vale of Berkeley between the east bank of the River Severn and the M5 motorway, within the Stroud administrative district. The town is noted for Berkeley Castle, where the imprisoned Edward II was murdered, as well as the birthplace of the physician Edward Jenner, pioneer of the smallpox vaccine, the world's first vaccine. The parish includes the village of Berkeley Heath, which runs along the A38 Bristol to Gloucester road and the adjacent B4066 towards Berkeley.'

Stuart started by saying that it was important to understand minsters, and their role in the birth of christianity. There are lots of minsters in the area of Gloucestershire where Berkeley Castle is situated, they are generally a days walking distance apart which I think Stuart said was 14 miles. The Norman feudal castle became a minster in 660AD, before this Berkeley lay in the Kingdom of Hwicce which means witch. Berkeley is a double house minster, housing monks one side and nuns on the other side, and is the longest continuously occupied building in England.

There is evidence of a Roman wall in the excavations, there were Roman villas nearby and it's not far from the Fosse Way. The photo below shows where the wall was situated if you click on the link above: 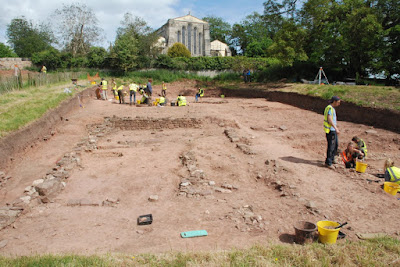 I was more interested in what artefacts were found, to a beginner like me, this seems to be the most exciting part of archaeology. There were something like 20000 artefacts discovered, some were displayed in the windows of people's houses in 2016 leading to the team receiving an award for Archaeology Research Project of the Year

I made a note of 3 artefacts: a high status ring from 9-10th Century, an astel, which is a page turner so the reader doesn't get the paper greasy, and a whetstone.

The talk was videoed and appears on our website where you can find quite a few of the talks we have had. If the talk doesn't appear on there, it's because the speaker was new to Zoom and requested that we didn't video it. 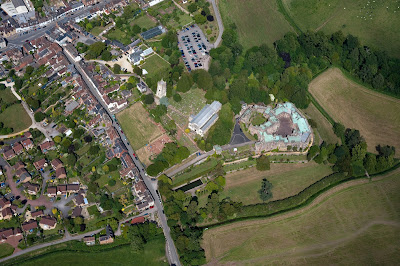 I've added these two photos, the first is an aerial view and below another photo of people working on the dig. 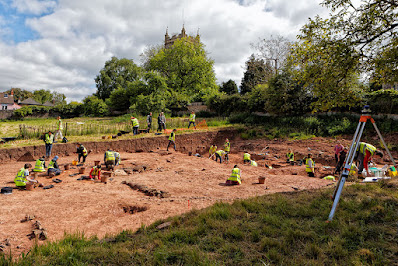 If you are interested in being involved in working on the Lower Hazel dig this summer when restrictions are lifted, then please contact me, and I'm hoping we can visit in person later on in the year. I'm not setting dates yet...

Posted by Friendsof Swindon Museum and Art Gallery at 10:26 No comments: