We were very pleased to welcome Dan Hicks for our April Zoom talk, to talk about museum collections, and collecting. In preparation for the talk, I read his magnificent book: The  Brutish Museums:The Benin Bronzes, Colonial Violence and Cultural Restitution', it lays everything bare, and gives hope for the future. I will include notes from the talk, there is a link to the video recording which will give you a better idea of what was said at the end of this piece. 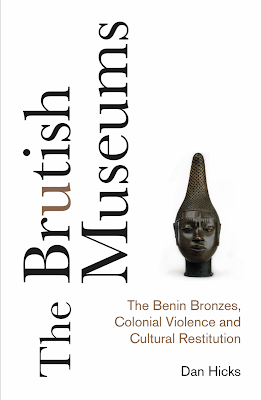 Dan Hicks has worked at the Pitt Rivers Museum in Oxford for 14 years where he is Curator, he is also Professor of Contemporary Archaeology at Oxford University. Dan began by explaining his job as a conservator suffers from mission creep; the world is constantly changing, even before BLM/anti racist movements. Since 2015, Dan has been  re-evaluating his roles, one of which is looking at the evolution of culture as seen though the collections. The museum was founded in 1884 when General Pitt-Rivers donated his collection to the University of Oxford on condition they would house it in a Museum. The Museum was first opened to visitors in 1887 and fully opened in 1892. 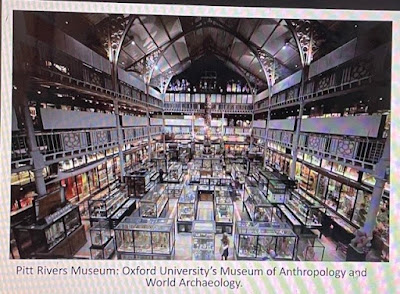 Looking from above, the splendid cases at the Pitt Rivers Museum 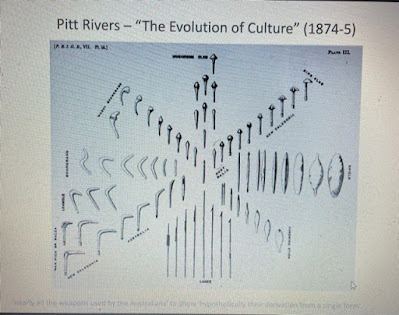 Above, this slide shows 'nearly all the weapons used by the Australians' to show 'hypothetically the derivation from a single form'. In the middle you can see the stick, and then radiating out from there, the changing forms to make weapons from different cultures. These would have been available for sale in London at the height of the Empire. An examination of weapons around the time of the Crimea shows how cultural evolution/ supremacy came about with better weaponry on the side of the oppressors. The Pitt Rivers Museum was described as 'one of the most violent spaces in Oxford' in 2015 in the student led protest Rhodes Must Fall explaining 'it houses thousands of artefacts stolen from colonised peoples throughout the world'. 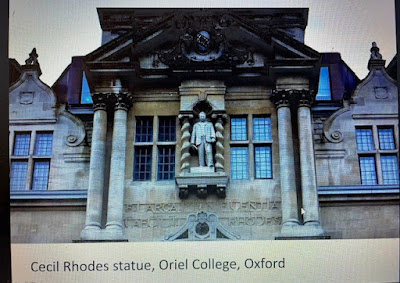 Although apartheid ended officially in the 1990s in South Africa, the presence of the statue outside Oriel College normalised the white supremacist. 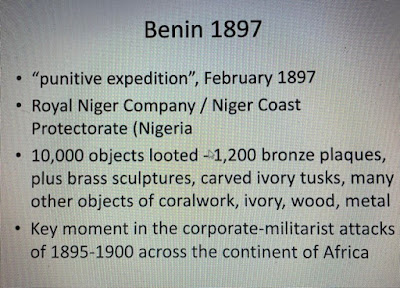 Superior weaponry enabled the Benin expedition to take place in 1897, the British desecrated Benin City, looting and in a chaotic free for all, carved up objects for personal gain. The towns and villages were razed to the ground, and the plundered spoils sold to museums, and individual collectors. 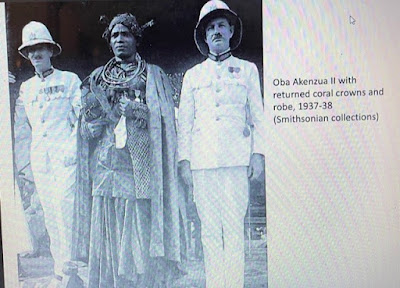 There has been a long history of restitution of stolen artefacts as seen above. In 1960, there was a wave of countries gaining independence from colonialism. I remember my first sight of an atlas at school in 1960 being told that Gold Coast  was now called Ghana, and being surprised by the subsequent explanation of the Empire. 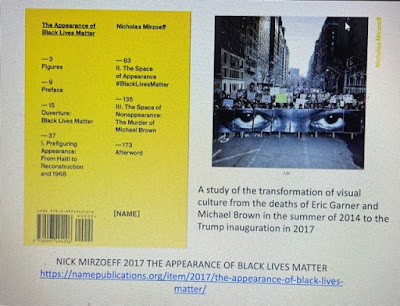 Nick Mirzoeff published an e book: 'The Appearance of Black Lives Matter' an anti colonialism, anti racist work; requiring a further look at the looted objects in museums, only 1% of which are currently on display. The talk was just over a week after the verdict on the killing of George Floyd: 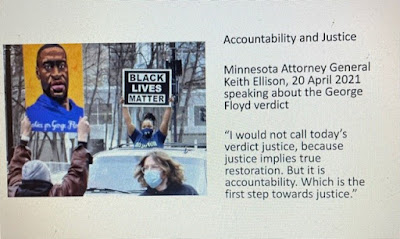 And barely a day goes by without another institution re examining its relationship to museum items and a consideration of how restitution may take place.

Thank you once again Dan for helping us to understand the situation of Museums and their collections in 2021. A video of the talk can be found here.

Posted by Friendsof Swindon Museum and Art Gallery at 03:36 No comments: