We were very fortunate last night to have a talk by Director of the Wiltshire Museum in Devizes, David Dawson, about a current exhibition they are holding entitled Ravilious: Downland Man. The exhibition is curated by the fabulous James Russell, who many of you know via talks and exhibitions.

Last night we were treated to a highly illuminating talk, with many slides, particularly fascinating was some of the background information to paintings, and the fact that David had been out to photograph many of the places in Wiltshire that Ravilious had painted. It really made us feel that Ravilious had a great empathy for the chalk downlands, although he was really maybe a Sussex downland man at heart, having moved from London where he was born to Eastbourne. Ravilious went to Eastbourne School of Art and then the Royal College of Art where he met Paul Nash. He was influenced by landscape painters John Sell Cottman and Alexander Cozens.

During the talk, I took many photographs of the computer screen, hopefully these will give you an idea of the talk, it was also recorded, so you can watch a recording, the link is at the end of this post. 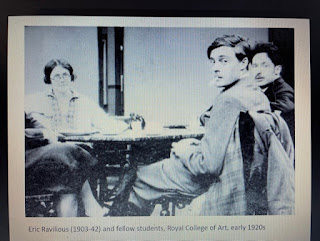 David started by showing us this famous photo of Ravilious at the Royal College of Art in the early 1920s, and then talked about this wood engraving below, apparently cutting out the white areas which was the reverse of what most people were doing. The piece is 3''x4'' which must have required special tools to get this sort of detail. A schoolfriend apparently lent over the back of a sofa to pose so Ravilious could achieve this position. There's a lot more detail than I had seen before in the background, including what might be a red kite on the left. 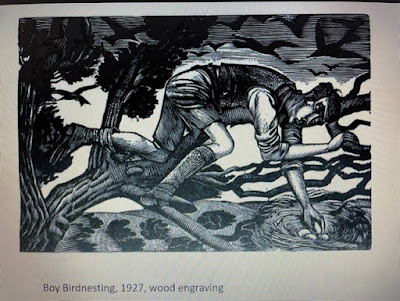 The landscape in the background as seen above was an important feature of the work, seen particularly clearly in the Morley College murals which were painted from 1928-30 with Edward Bawden. After the Royal College, Ravilious went back to Eastbourne where as a teacher he met Tirzah Garwood, and with the cheque from the Morley murals, was able to convince her father that he could provide for his daughter. Tirzah was a prolific artist, this is a wonderful example of her work, like Ravilious, she chose a train carriage and depicted a downland background including a chalk pit. 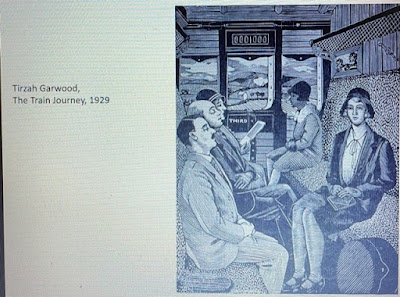 Sir Geoffrey Fry of Fry's chocolate lived at Oare House, just south of Pewsey for much of the twentieth century, he had extra wings added to the magnificent house by Clough Williams-Ellis, and commissioned Ravilious to visit and do some paintings. 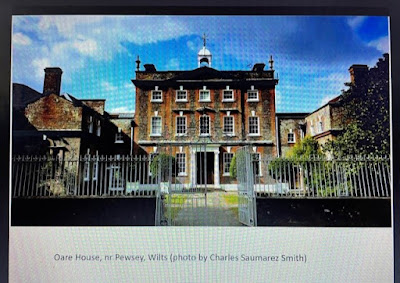 The gardens are open for the NGS and well worth a visit.While there Ravilious painted in the area, including at Rainscombe, on the downs above Oare, and below you can see the painting on the right, and the photograph of the area on the left 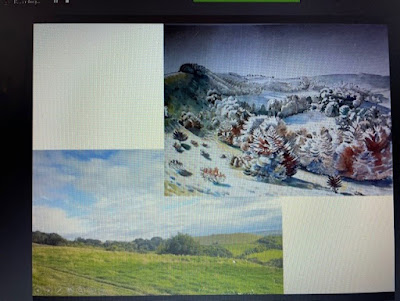 Similarly Huish Gap in the painting and a photograph of the site where apparently there has been a boundary for 3000 years. 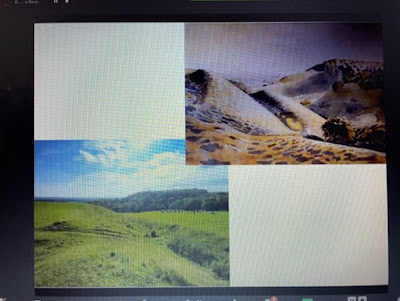 But the most famous painting Ravilious produced at this time must be 'Strawberry Nets' painted with the most amazing precision in Oare House garden, David showed us the exact site where the strawberry beds were, now a compost heap! 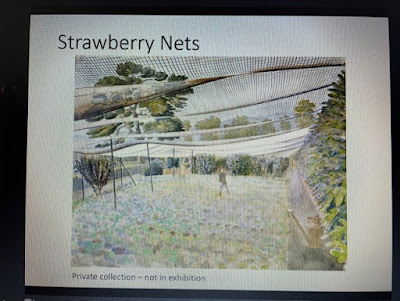 I also like this painting very much, it's painted from the first floor of Oare House overlooking the garden and the downs can be seen in the distance. 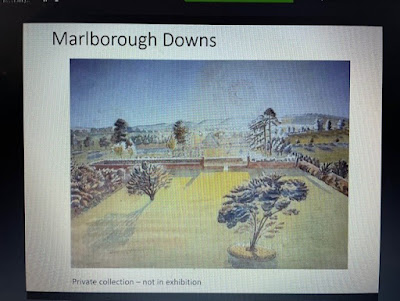 There was an interesting tale behind this painting, which like many others David has pinpointed where it was painted. This is a particular favourite of his with the marching telegraph poles and the red van, dating the time it as painted. When it came up for sale, David raised £180,000 in an attempt to buy it, however it went for £220,000 at auction, and would have needed at least 30% fees on top of that. 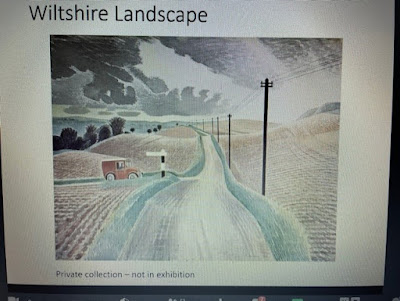 David went on to talk about Ravilious' meeting and staying with Peggy Angus at Furlongs where they both painted The Cement Pit: 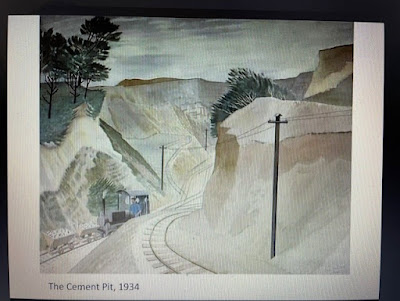 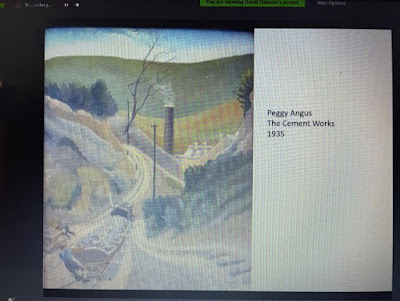 This painting below called Chalk Paths demonstrates Ravilious' sparing use of watercolours to achieve the effect of chalk where the white paper shows through, he also mentioned that Ravilious was able to capture light so well in paintings, even when it changed while he was completing it. 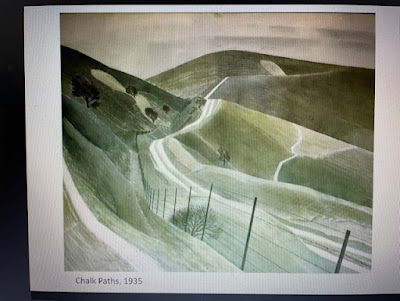 There were Shell guides produced at this time to encourage people to buy petrol and drive around the countryside. It could have been that Ravilious wanted to be asked to produce paintings for one of the guides when he produced paintings such as the one below: 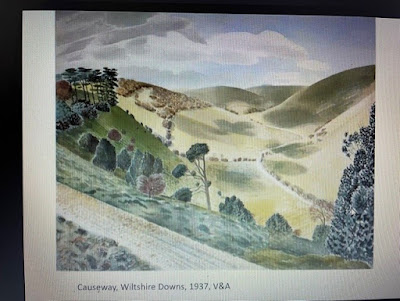 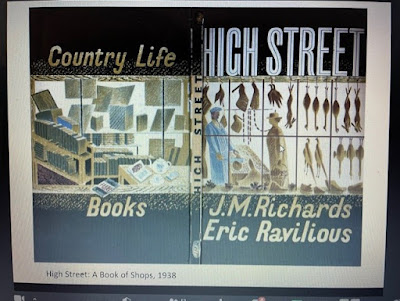 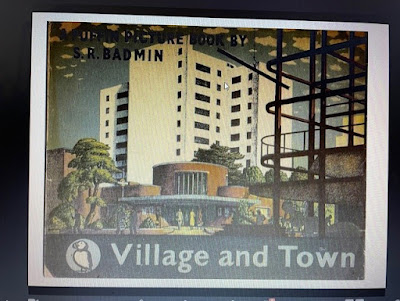 In 1939 Ravilious was commissioned to produce a book entitled 'White Horse, this painting was going to feature on the cover of the book, and there were various pages produced as mock ups of what the book would be like. 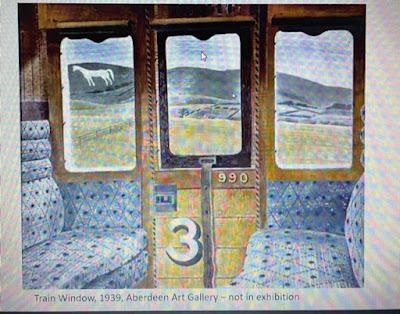 The war intervened and the embryonic book was lost for years, and found recently. The Wiltshire Museum bought the book in 2012 for £6000.

Many of you know that the end of the Ravilious story was sadly in Iceland in 1942 when the plane Ravilious was flying in disappeared almost with out trace. We had featured Ravilious talks by James Russell in the past, and visited the fabulous exhibition curated by him at the Dulwich Picture Gallery. Please click here for links back to those blog posts recalling the events.

I also fortunately recorded the talk, so for the real thing, please click here.

Friends will visit this exhibition on 18 September at 11.30am, but of course you can visit at any time until 30 January 2022.

Posted by Friendsof Swindon Museum and Art Gallery at 05:22 No comments:

Latest information about Apsley House. There has been a proposal from South Swindon Parish Council:

South Swindon Parish Council has passed a resolution at the Full Council meeting, allowing the Parish Chair to begin discussions with Swindon Borough Council regarding a short term transfer of the Swindon Museum and Art Gallery, located in Apsley House, Bath Road, to the Parish Council.

The proposed transfer of the facility could see the Parish Council amalgamate the Old Town Library provision into Apsley House adding value to the final proposition. The option would give the Borough Council breathing space to progress their aspirations to provide a purpose built Museum and Art Gallery as part of the cultural quarter offering, currently expected in 2030.

It is also understood that the Borough Council is now considering a temporary move of the Museum and Art Gallery to the first floor of the Civic Building on Euclid Street. This proposal has not been costed or subject to a feasibility study. It is right that the Parish should work with the Borough Council to ensure all options are considered and aim to reopen the doors for the much loved Swindon Museum and Art Gallery at the earliest opportunity.

Cllr Chris Watts, Chair of South Swindon Parish Council says, "I have contacted Swindon Borough Council and requested an initial meeting with the lead member and officers to kickstart discussions on a proposal that could see the Museum and Art Gallery remain at Apsley House. The Parish understands that Apsley House is not the ideal facility to house the town’s Museum and Art Gallery, but in the absence of a viable near term alternative we believe it is imperative for a town the size of Swindon, with aspirations of City status, to ensure such a facility remains open and accessible to the public. We are pleased to have received support from the Friends of the Museum and Art Gallery and the Old Town Business Association.”

The Museum and Art Gallery was initially closed at the start of the Pandemic.

In June 2021, Swindon Borough Council informed Councillors and the Friends of the Museum and Art Gallery that Apsley House would not reopen and the collection would be placed into storage until such time as a new facility in the proposed Cultural Quarter was completed in 2030. The Borough Council also informed stakeholders that Apsley House would be placed on the market for sale. 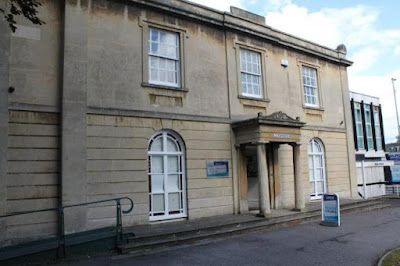 Posted by Friendsof Swindon Museum and Art Gallery at 11:12 No comments: