Twelve members of the Friends met at Wiltshire Museum in Devizes last week to have a look at the Ravilious exhibition curated by James Russell. I thought I'd start with a photo of our group since it is such a rare event to get so many of us together in person. On arrival, we were offered a drink and biscuits in this room before going to look at the exhibition, we could also leave belongings in there for a couple of hours, which was very handy. 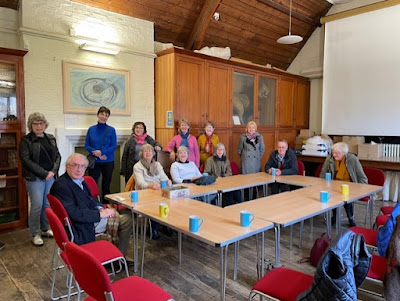 I'll also include a copy of the poster because there was no permission to take photos of the Ravilious works. 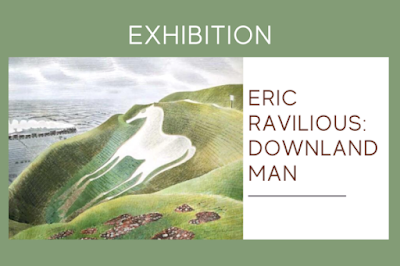 It is a wonderful exhibition with many paintings and works by Ravilious, it's well worth seeing, not to be missed I would say. The rooms where the works are shown have been upgraded and are really lovely as well. I took a few photos of the wonderful museum artefacts, there are a huge amount of exhibits there. 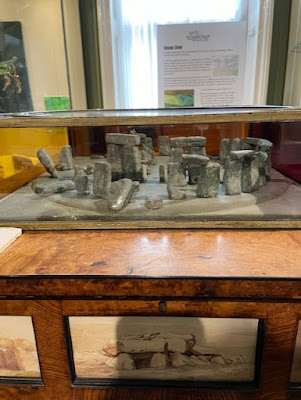 I took 2 photographs of the Britton 'Celtic' Cabinet which was made in 1824 it's made in the shape of one of the trilithons at Stonehenge with inset watercolours by contemporary artists such as Cotman, it's well worth looking up when you're there. 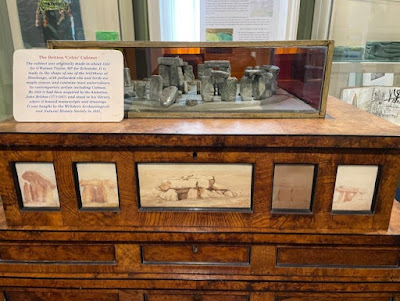 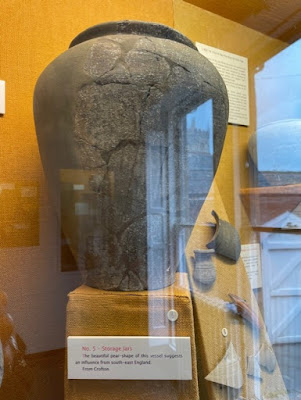 There are many examples of storage jars, this pear shaped one was particularly lovely, it was found at Crofton. 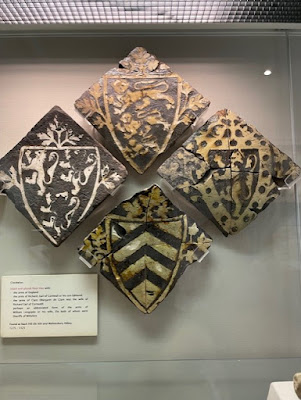 There was also an exhibition of 6 of David Inshaw's North Wiltshire Landscapes coloured etchings and aquatints which are fabulous, but hard to see on a stair way and difficult to photograph because of reflections. I have found information about them online and therefore have one good photograph: 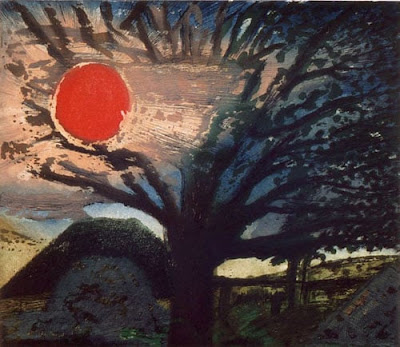 This one is called 'Silbury Sunset' 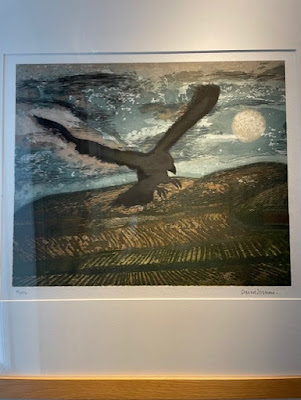 That one is 'East Kennet' 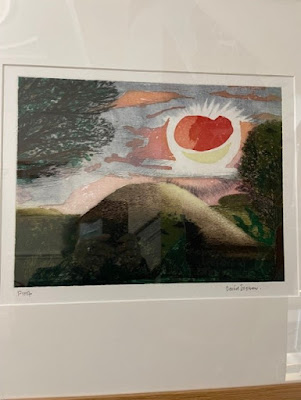 Above 'Silbury Sunrise;
This is what the Art Fund website says about them:

These vivid coloured aquatints are the first works that he produced in this technique. Those depicting the prehistoric monuments in the Avebury World Heritage Site point to the tradition of British Romanticism, of hallowed ancient monuments depicted in their landscape setting. Inshaw admired the work of Thomas Hardy and, like Hardy, is sensitive to the physical and spiritual idiosyncracies of the region's landscape, whether in association with human figures, with the dramatic prehistoric monuments of the area, or with its native wildlife. No aspect is wholly identifiable but the spirit of the place rings out.'

Fabulous visit, thank you to all who make Wiltshire Museum in Devizes such a brilliant place tfor visitors..